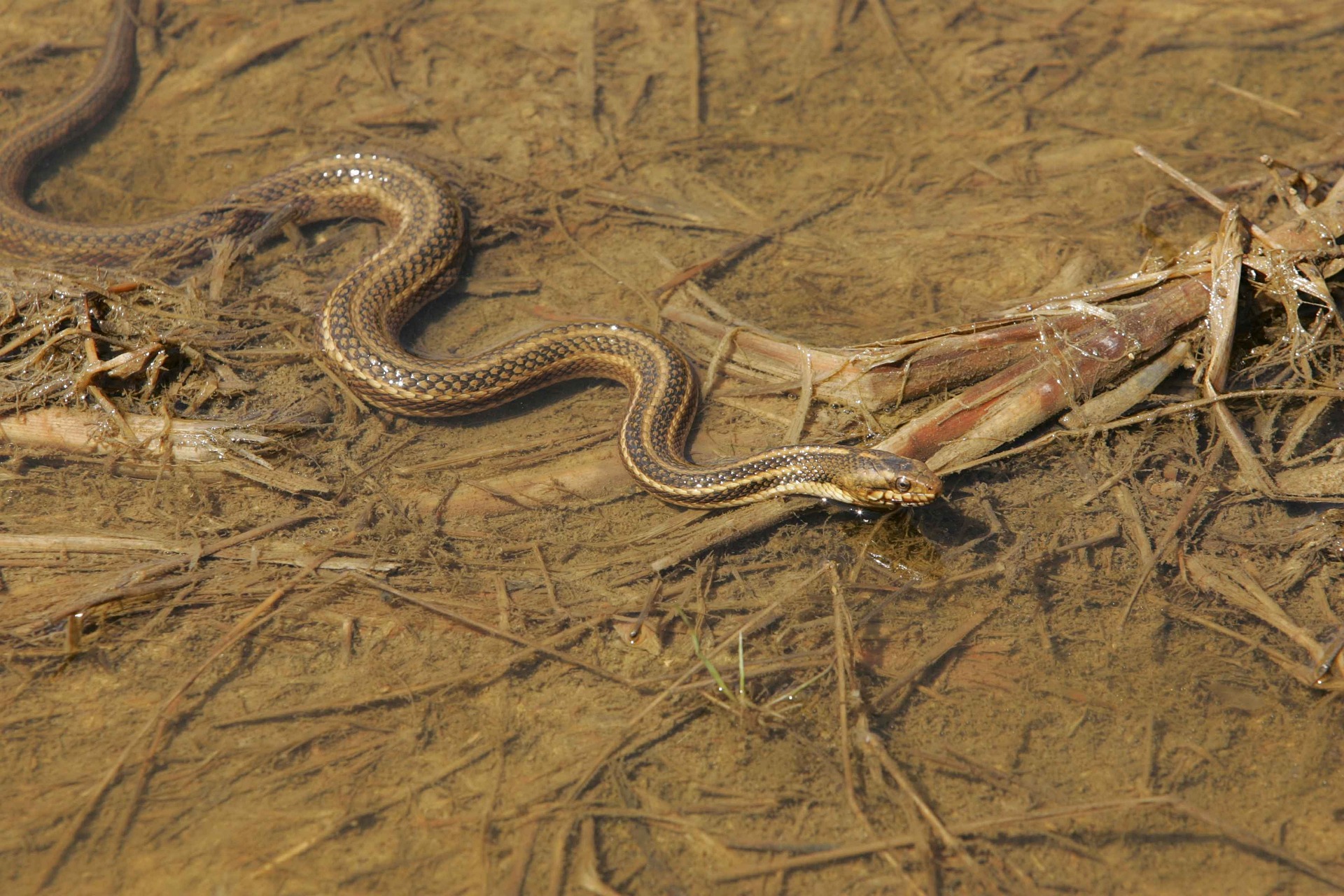 Michigan is home to a wide variety of interesting wildlife. Among these animals are elk, deer, bears, coyotes, and of course, all different kinds of michigan snakes. There are a few misconceptions about the types of snakes found in Michigan occur. Despite what you’ve probably heard, only one venomous snake occurs in Michigan and the rest are practically harmless to humans. Let’s take a look at some of the snake species you may encounter during a stay in Michigan.

You may also want to know if pet snakes can eat mice.

You haven’t truly experienced Michigan wildlife until you’ve accidentally tripped over a garter snake. This is one of the most common snakes found in Michigan. They grow only a few feet long, but can be recognized by the orange and brown stripes that run the length of their bodies. Gartner snakes hang out in grassy areas, but are active in all parts of the state. They eat mostly small animals such as mice and frogs, but they also occasionally catch the occasional fish or bird. These michigan snakes are not venomous, and they take off as soon as they see a human. 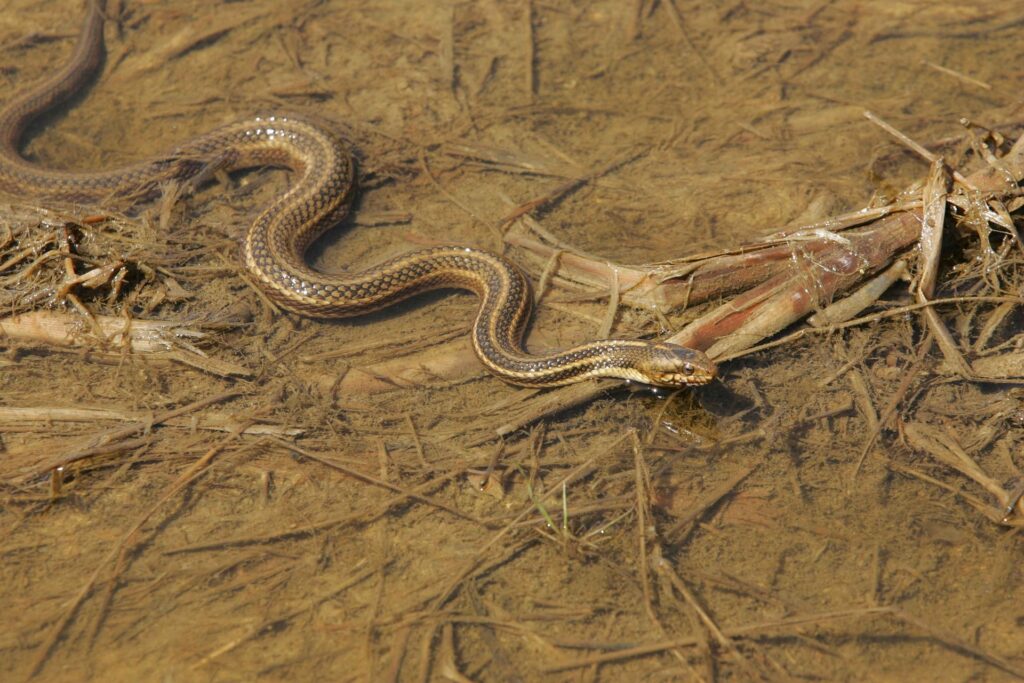 The Butlers Gartner snake is another common species that prefers prefers wet meadows, prairies, swampy ponds, lakes and other moist and grassy habitats. They have three yellow and orange stripes on their black, brown or olive-colored bodies. These garter snakes are smaller than the eastern garter snakes with longer heads. Because of their small size, earthworms are their main source of protein.

This is one of Michigan’s many water snakes. The Northern Ribbon snake is almost always somewhere on the edge of a marsh, stream, lake or pond where there is not much vegetation. Although they spend their time in the water spend, they also like to bask on a rock in the sun. People often confuse the Norther Ribbon with Gartner snakes because of their three vertical stripes. They don’t grow very large, so they mainly eat tadpoles, fish and insects. This is another species that likely to flee as soon as they notice you are nearby.

A snake that is a little harder to find in Michigan is the northern grass snake. They are so elusive that even the Michigan Department of Natural Resources has trouble keeping track of their numbers. monitoring. This is another small snake species that usually has a solid color of black, blue, or gray with a distinctive bright yellow ring around its neck. These snakes are usually seen in wooded areas and emerge only at night.

Although the northern red-bellied snake is beautiful, they almost never do well in captivity. They also have a short lifespan, so you won’t be able to appreciate them for long. This species of snake grows up to 15 cm long and keeps to forests and grassy areas. The markings on them are not very impressive at first. That is, until you see the vivid red underbelly. These snakes are not venomous and eat only small food such as snails.

Another small species of snake that you are likely to find in forested areas of Michigan, is the Northern Brown Snake. Adult Brown snakes are very light in color and only a few have even lighter stripes on their flanks. Like many of the other small snake species here, they eat mostly worms and small insects, but make a tasty meal for even larger michigan snakes, frogs, weasels, and cats. They are also some of the only michigan snakes that do well in captivity.

Although they are out there, you’ll have a hard time finding the Kirtlands snake to find. Even the Michigan Department of Natural Resources cannot find these michigan snakes cannot be found in large numbers, and they are listed as endangered species. These snakes are known for their speckled red, brown and gray bodies. They have a small range in states in the Midwest, such as Ohio, Illinois, Indiana, and some parts of Kentucky. Their vibrant colors make them they look dangerous, but they rarely stay around long enough to harm people.

Unfortunately, the queen snake is one that naturalists are particularly concerned. These snakes have lost much of their natural habitat because they only live in small streams with rocky bottoms. They eat minnow, tadpoles, crayfish and other small aquatic animals. The queen snake has a medium-sized, dark gray body with lighter areas around the throat and chin.

Of all the snake species in Michigan, the smooth green snake is the easiest to spot. These snakes are small, but know how to make make an entrance. They have smooth green skin and stick themselves primarily to a diet of insects. Because of their colorful body, they are hunted by predators such as hawks, herons, bears, foxes and cats. There are not many smooth green snakes left in Michigan, but they are usually found in grassy, open habitats such as meadows, savannas and pastures.

People assume the snake is poisonous because of the way it behavior. When cornered, they make their head and neck flat so they look like a cobra. They have also been seen to roll onto their backs and play dead. Even though they have venom, it is not dangerous unless you are a frog or salamander. The eastern hog-nosed snakes can grow up to 45 inches long and don’t flaunt with many exciting colors.

The only venomous snakes in Michigan are the Eastern Massasauga Rattlesnakes. You may have heard them referred to as swamp rattlesnakes mentioned. These michigan snakes are shy and try to avoid people at all costs. avoid. Because of habitat loss, it’s rare these days to see one. They are now listed as an endangered species. Although a bite from a rattlesnake in Michigan is rare, they do occur and should be taken seriously. If you happen to see one, keep your distance and do not approach it under any circumstances. If you are bitten, call 911 or go to a hospital immediately.

Snakes can be found in every state in the country, and Michigan is no exception. Although some people believe that the humid environment
attracts so many michigan snakes here, there aren’t many that can do much damage cause if they bite you. There is really only one venomous snake that lives in Michigan and even those are rare to see.