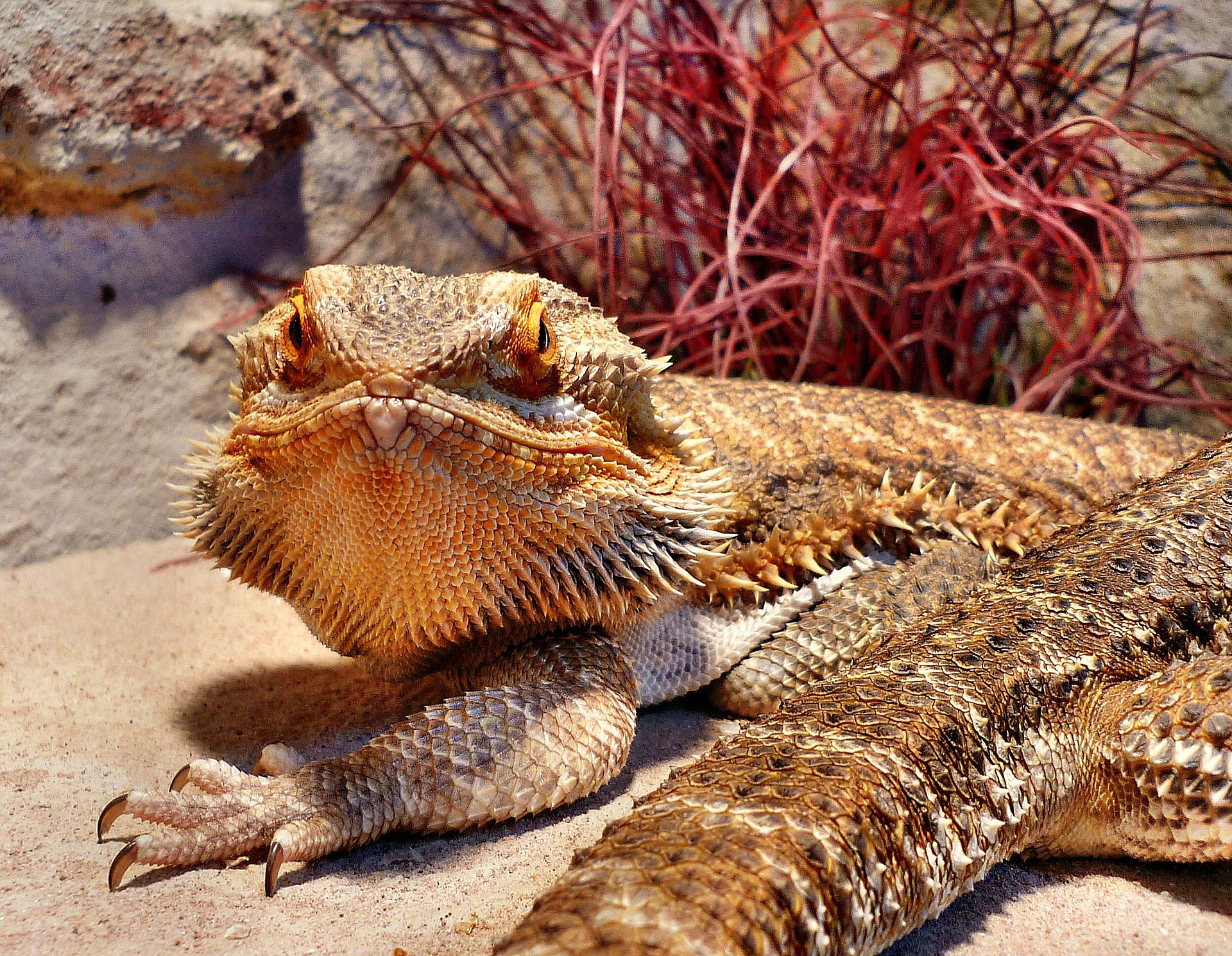 You may also want to read about bearded dragon care.

The Bearded Dragon (Pogona vitticeps) is found in Australia and nowhere else. The agame lives in the central-eastern part of the country. The range of the bearded agame looks like a patch in the middle of four states, covering clockwise the Australian states of Northern Territory, Queensland, New South Wales and South Australia. In the Northern Territory, the agame is found in the southeastern part, in Queensland in the southwestern part. In New South Wales, the agame occurs in the northwest, and finally, in South Australia, the bearded agame is found only in the northeast.

The body is flattened and furnished with many spines, which are, however, quite soft. The spines on the head are, however, cornified. The body color of the bearded dragon is the same color as its surroundings, reddish-brown with jagged, dark spots on the back and stripes on the head. This pattern stands out strongly in young animals and fades as the animals grow; older specimens are usually uniform in color. The brownish-red to gray color serves as camouflage, resembling the color of the sand on which the agame lives.

The body color of specimens from drier regions is often more off-putting than that of populations from more temperate areas. The tail is very short compared to other lizards; about the same length as the body. The tail has many spines, consisting of converted scales. The tail is used as a balance when running, especially when walking on the hind legs. In addition, the tail serves as a striking weapon to strike competitors and enemies.

The bearded dragon is a ground-dwelling species that gets along well on the ground, but can also climb rocks and trees. Especially the younger animals climb; they are then safe from their larger conspecifics, which stay more on the ground. Bearded dragon habitats consists of semi-deserts and dry, sparsely vegetated forests to areas of scrub. Particularly in the south, the agame can also be found along the coast. The bearded agame is active during the day and hides under rocks or in burrows of other animals at night. This is also a place where its greatest enemy, the bird of prey, cannot catch it.

The bearded dragon is a medium-sized lizard with powerful claws and a distinctly flattened body. An adult bearded dragon can reach a total body length of about 60 centimeters. About half of the total body length consists of the tail. The agama has a relatively large head, a plump and stocky body and a relatively short and thin tail compared to other lizards. Males grow larger than females and can also be recognized by the larger head and the more dark to black colored “beard” on the throat side.

Males also have so-called femoral pores; these are enlarged pores on the underside of the thighs. Males also have a larger cloacal opening than females, which can be seen by slightly shifting the skin fold of the cloaca. Rows of spines are present on the head, as well as on tail and back and especially on the flanks of the body. The head is triangular in shape and relatively large and blunt, the eyes and ear openings are clearly visible. The ear openings are somewhat deeper and the eyelids are greatly thickened, which serves to keep out grains of sand.

The “beard” consists of an attachable throat pouch covered with spiny scales that protrude forward when the throat pouch is displayed, this makes the head appear much larger. Setting up the beard serves solely to impress. The bearded dragon cannot “sting” with this and is known to be a bite-shy species toward enemies.

Bearded dragons (Pogona vitticeps) use a form of visual communication to court each other. The bearded dragon can communicate by making morse-like signals by nodding its head and waving its front legs, just like other agamas such as the Chinese water dragon. The male can put on his black spiny beard and blows his body full of air during foreplay. He runs small circles in front of the female and occasionally tramples his legs. Occasionally, the mouth is opened and the yellow mouth rim becomes visible. The female will show by waving her front legs that she wants to mate.

If she does not want to -because she is already carrying eggs, for example- she will bite off a persistent male. After mating, the female deposits her eggs in an underground nest after about 45 to 60 days. Bearded dragon habitats are very dry so they dig a nest. When digging the nest, she largely disappears into the soil. About 20 eggs are deposited per clutch, this can vary from 8 to 24. The incubation period is about two to 2.5 months after which the juveniles emerge. They resemble the parents in everything and immediately show the characteristic waving behavior. However, they are obviously much smaller and have a proportionally much larger head.