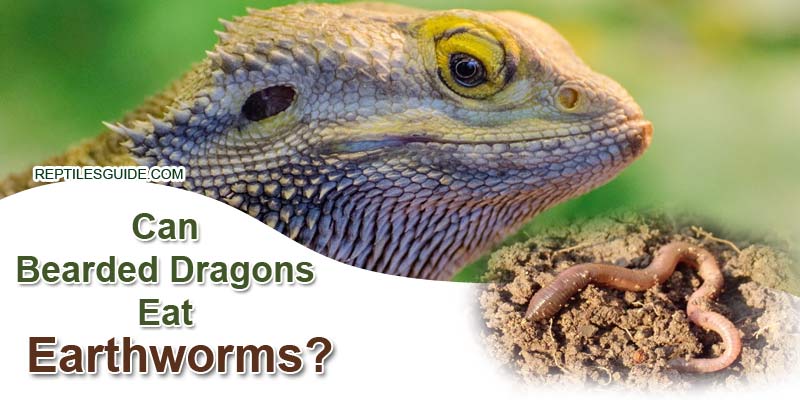 If this is your first time owning a bearded dragon or planning on getting one, you may have a lot of questions about what they eat. One of the foods that are quite abundant and which you can find in your backyard is earthworms. You may wonder if your bearded dragons can eat them or not.

So, can bearded dragons eat earthworms? Yes, bearded dragons can eat earthworms, but not all of them will enjoy eating them. Some beardie will simply leave them alone if you put some near them. Earthworms have an abundance of nutrition, especially protein. These worms are relatively safe for bearded dragons to consume. However, it’s important that you do not feed any that you find in the yard. It could be contaminated with chemicals such as fertilizers, pesticides, and herbicides. It’s best to buy earthworms from a trusted source to feed your bearded dragons.

When it comes to earthworms, it will depend on your bearded dragon. Each has its own taste of food. Some will eat it and some will not.

For those that don’t eat the earthworms, it’s usually the taste that puts them off. Earthworms release mucus that lines their skin. This is what helps move them along in the soil.

When the bearded dragon eats the worm, they will also get the mucus in their mouth. Therefore, they’ll spit the worm out.

On the other hand, other bearded dragons that are less fussy will eat the earthworms regardless of the slime on them.

In the wild, bearded dragons do not eat earthworms. These reptiles are native to Australia, which usually have landscapes that is hot. Due to this condition, earthworms will have a hard time surviving. They need cool soil to be able to move around.

Therefore, it will be unlikely that earthworms will be found. Instead, bearded dragons will find most of their food above the ground. These will include ants, crickets, spiders, and termites.

If you have a bearded dragon that enjoys eating earthworms, you may be tempted to feed them those caught outdoors. This is something that is not recommended, and it’s highly risky.

Earthworms caught in the backyard and other places outdoors are not good for two reasons. The reasons are chemical contamination and parasites.

In the wild, earthworms eat everything that they can find. Unfortunately, parasites live in the soil as well. As the worm slithers through the soil, the parasites will attach themselves or live in the worm.

When your bearded dragon eats the worm, it will get infected with the parasites as well. The parasites will cause them to become malnourished and prone to other illnesses.

Secondly, the earthworms will get contaminated with chemicals such as fertilizers, pesticides, and herbicides. These chemicals are used often in yards and gardens to prevent pests and help the plants grow. All of these chemicals are dangerous to the health of your bearded dragons.

Instead of feeding them wild earthworms, it’s recommended to buy them from a trusted source that doesn’t have parasites or exposure to chemicals.

Earthworms have plenty of nutrients that the bearded dragons require to be healthy and strong.

Some of the nutrients that earthworms have are calcium, protein, iron, manganese, copper, and zinc.

When bearded dragons are fed earthworms, there is a good deal of health benefits for them. The main ones are as follows:

The earthworm is a good source of protein. Bearded dragons require protein in their diet for their organs to function properly and to be in good health. Baby and juveniles will require a lot of protein since they are still growing.

As they become an adult, they will stop growing and will require less protein in their diet.

Earthworms are high in calcium. Calcium is an essential nutrient for bearded dragons. They need this mineral to maintain strong bones and carry out other important functions. Their body also needs calcium for muscles to move and for nerves to carry messages from the brain to other parts of the body.

Baby bearded dragons can eat earthworms. However, make sure the size of the worm is very tiny. It should be the size between their two eyes.

If it’s any larger, it could cause them to choke on it or impaction. Impaction is when food is blocked in the intestine, which will result in constipation. For baby bearded dragons, this is very dangerous and could even lead to paralysis.

If you’re planning to feed them your baby bearded dragons, make sure the earthworms are small, and it’s no longer than the distance between their eyes.

How Many Earthworms To Feed Bearded Dragons?

Earthworms are fine to feed your bearded dragons, but it’s best to feed them in small amounts. The reason for that is the worms are high fat, which will result in the beardie becoming obese.

Bearded dragons kept in captivity are prone to become overweight due to the lack of exercise they get.

To prevent any weight problems, only feed your bearded dragon one earthworm at each feeding.

How Often To Feed Earthworms To Bearded Dragons?

While earthworms don’t have any toxins that could harm them, it’s best to feed them in moderation. Again, earthworms are high in fat content. Too much fat in their diet will lead to obesity and other health issues for your bearded dragons.

Therefore, to prevent any health issues from arising, it’s best to feed earthworms to your bearded dragons, once or twice a week.

Other Worms That Bearded Dragons Can Eat

Earthworms aren’t the only worms that bearded dragons can eat. There are several other worms that you can feed them as well.

Mealworms are the most popular feeder insects for reptiles. This worm is high in protein content, which makes them ideal for young reptiles that are still growing.

However, for young bearded dragons, it’s not a good idea to feed them. The mealworms have a hard outer shell that will make it too difficult for them to digest.

Once they are an adult, you can feed them mealworms. Mealworms are sold live and freeze-dried. Both types can be fed to the bearded dragons.

Just remember to only give them mealworms that are smaller than the distance between both their eyes.

Superworms are similar to mealworms, but they are much larger. With their larger size, the protein content is much higher than mealworms.

For baby and young bearded dragons, it’s not ideal to feed them superworms. These worms have a very tough outer shell and will be difficult for them to digest. Also, it can cause them to choke on it.

For an adult bearded, you can feed them superworms. However, make sure that the worms are no larger than the distance between their eyes. Otherwise, it will make it difficult for them to eat it.

During the warmer months when plants start growing, especially tomato plants, hornworms will be found on them.

Out of all the worms, hornworms are one of the healthiest food options for bearded dragons. It has a lot of nutrition that the beardie can benefit from.

Young bearded dragons should not be fed any hornworms. Once they are fully grown, you can start to feed them. Make sure that the hornworms are no larger than the distance between their eyes. Otherwise, the worm may cause them to choke on it.

Yes, bearded dragons can eat red earthworms. However, make sure they are the ones that have been raised for feed. Wild-caught red earthworms can be harmful to them as they could have parasites or contaminated with chemicals.