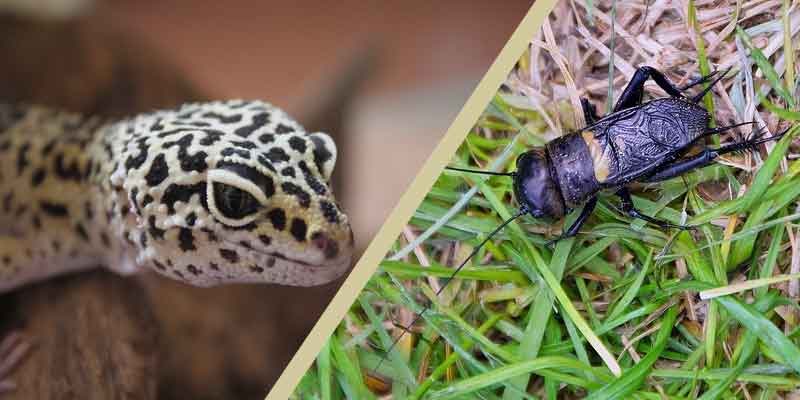 Having a leopard gecko can become costly over time, especially when it comes to feeding them. Therefore, some people will start to look for ways to cut down the cost of feeder insects. In backyards and fields, there are plentiful of insects, especially crickets. Crickets in the wild don’t cost anything and there’s a lot of them.

So can leopard geckos eat wild crickets? Wild crickets are great for leopard geckos to eat. However, the problem with crickets in the wild is the parasites and the chemicals they are exposed to. All of this will eventually end up in your leopard gecko’s body when they eat the crickets. This could cause them to become sick and even death can occur.

Below are 2 reasons why you should never feed your leopard gecko wild crickets:

Crickets in the wild will most likely contract some type of parasites. There are a lot of parasites that crickets could be infected with, but the most common ones are Escherichia Coli and salmonella.

Also, the feces of the crickets could contain parasitic worms. While the crickets are in the enclosure, the cricket could poop with the worms inside. As the leopard geckos get close, the worms could crawl and make their way into the gecko’s body. From there, they may start multiplying or start eating the inside of the reptile.

While not all crickets will have parasites, but if you catch the wrong one, it could pose a serious danger to your leopard gecko. Eating wild crickets that have parasites could make your reptile very sick and could even kill them.

The leopard gecko that you have was most likely born and raised in captivity. In captivity, they are not exposed to any parasites or other harmful bacteria. Therefore, these reptiles are not immune to those parasites since it’s foreign to them.

Once the parasite invades the leopard gecko body, their immune system will not know how to deal with it. The result will be a sick lizard and you’ll mostly end up having to take them to the veterinary.

Wild crickets are free to roam anywhere they want. For that reason, they are exposed to the herbicide, pesticides, and other harmful chemicals.

If the wild crickets are ingested by the leopard geckos, it could make them sick, or cause death.

Therefore, never go outside and just grab a cricket and feed them to your leopard gecko. Additionally, never set free your pet gecko outside where they may have a chance of catching and eating wild crickets.

What To Feed Leopard Geckos Instead Of Wild Crickets

Instead of wild crickets, you should feed them store-bought or farm-raised crickets. These crickets are bred just for food. Therefore, they will not be exposed to chemicals and parasites.

Feeder crickets can be bought from your local pet store or an online store. You can purchase them from the following places:

When buying feeder crickets, make sure that they are alive and healthy. You can tell healthy crickets apart from sick crickets by their movement. Healthy crickets will jump when you try to catch them. Sick crickets, on the other hand, will simply not move when provoked.

Sometimes, crickets may be healthy when you bought it, but when you get home, they are sick. If so, it’s best to throw them away and not feed your leopard gecko. Doing so could cause your lizard to become sick as well.

Other Insects To Feed Leopard Geckos

Besides crickets, leopard geckos can be fed a variety of other insects. It’s recommended to rotate their food each day so they

The best insects to feed your leopard gecko are crickets and mealworms. These are their staple food and should be fed to them daily.

However, you’ll want to introduce other insects and worms to them as well. This will help them meet their dietary needs. Some of the other insects to feed them are butterworms, beetles, cockroaches, silkworms, tomato hornworms, sowbugs, and waxworms.

Superworms and waxworms should only be fed to them as treats as they are high in fat content. Feeding them too much of these two worms could cause them to become obese. This is especially true for leopard geckos in captivity that doesn’t get too much exercise. Therefore, they should only be fed once a week.

Butterworms are another food that should only be given to leopard geckos as treat. These worms are high in fat content and they also contain bad calcium. Feed them butterworms once a week as that should be enough for them.

Besides obesity, butterworms are very addictive. Some leopard geckos have been known to get addicted to them and refuse to eat any other food.

Beetles, cockroaches, and sowbugs are great for leopard geckos. These can be fed to them a couple of times per week.

When feeding them any insects or worms, they should always be alive. Never feed them dead or dried insects and worms. These are not healthy for them and could make them sick.

Crickets that are bought from the store are not well-fed. These feeder crickets are raised just to be sold. The crickets found in most pet stores are only fed with a generic cricket feed. That cricket feed is usually made from processed wheat. This food has some nutritional value to it, but it won’t offer your leopard gecko enough of it.

Once you get them home, leave them in a cricket box for a couple of days before feeding them to your leopard gecko. While they are in the box, gut loads the crickets with fruits and vegetables. Crickets will eat these and it will provide more nutrition than feeding crickets straight from the store.

When feeding them fruits and vegetables, make sure it’s fresh and has not gone bad. Whatever that the crickets eat, these will also end up in your leopard gecko body.

Also, the more fresh the fruits and veggies are, the more nutrition it will have. Fruits and vegetables are the same when they go bad. As they start to go bad, they will start to lose their nutritional value.

Some of the best food to gut load the crickets are:

Beside gut loading the crickets for added nutritional value, you’ll also need to dust them with calcium powder as well. Crickets don’t have much calcium and that could be an issue for your leopard gecko.

Like any other reptiles, leopard geckos require calcium to keep them strong and healthy. If they do not get enough calcium each day, leopard geckos can become calcium deficient. This will lead to them suffering from Metabolic Bone Disease.

This Zoo Med Reptivite is a product I recommend, which is available on Amazon. There are no artificial additives or fillers in the product. Also, it’s balanced correctly with 2:1 calcium to phosphorous ratio.

Crickets are a staple diet of leopard geckos and they should be fed every day with it. However, you should avoid wild crickets as it has a high chance of contracting parasites or exposed to harmful chemicals. Besides crickets, there are other insects that you can feed them as well and some are much cheaper to buy than crickets.