You see your pet chameleon and they seem lonely by themself. Maybe you’re thinking about getting another chameleon to add to the enclosure so there will be two of them. Chameleons are one of those creatures that like to be by themselves. However, there is some instance when two chameleons can live together.

Can Two Chameleons Live Together?

In the wild, chameleons tend to be solitary creatures and very territorial. When two chameleons are close to each other, it’s usually for mating purposes or to defend their territory. Due to their natural instinct, they will behave the same while in captivity.

Therefore, having two chameleons living together in the same cage is not possible, even if they are the same species. The chameleons will fight fiercely over basking space, food, and water. All of this is dangerous as it could lead to injuries or death among the chameleons.

In the wild, when two chameleons are fighting, they will strut their body and hiss. The ones that are bigger will usually win. The losing chameleon will retreat and leave the area.

In captivity, on the other hand, when two chameleons are fighting, the one that loses will have nowhere to go. This is due to the limited space of the cage. Therefore, the chameleon that lost will become stressed due to being defeated.

Additionally, the dominant chameleon will also suffer the stress of having to maintain its dominance. You may notice the two chameleons are not fighting and living happily together, but actually they are not. Both are suffering from stress and this will eventually lead to health issues and even death.

Below are 3 reasons why two chameleons cannot live together.

Having two chameleons in the same cage will cause a fight with each other all the time. They could fight over the location of the basking spot, over food, and drinking space. Chameleons don’t like to share and they will defend it at all costs. Therefore, it’s best to separate the two chameleons if you’re planning to keep more than 1 as a pet.

The defeated chameleon will be stressed because they are unable to roam freely around the cage. Every move they make will have the dominant chameleon watching over them all the time.

Can Baby Chameleons Live Together?

Baby chameleons can live in the same cage with each other without any issues. Even if they are of different species, you will still be able to house them together.

Baby chameleons haven’t developed their antisocial personalities yet. Therefore, they have not learned to stake territories or fight yet. This will all change when they are about 4 months old. At this age, they should all be moved to their own cage.

At about 8 months of age, sexual maturity occurs in chameleons. They will be ready to breed and two male chameleons together will fight all the time. Therefore, you should absolutely never keep them together.

However, if you’re planning to breed them, you can leave the male and female in there. Otherwise, it’s recommended to remove them and put them in a separate cage.

Sometimes, especially for beginners, they will leave the baby chameleons in the cage together even when they become an adult. Some get the idea it’s ok because they see a lot of chameleons in the same cage at a pet store. Therefore, they assume it’s fine.

Pet stores usually house chameleons together so they think it will be ok. This practice is fine by the pet stores because the turnover for chameleons is quite high. Pet stores know which chameleon species sell fast and will usually stock those only. Chameleons living together do get stressed, but not for a long time like they would at home. 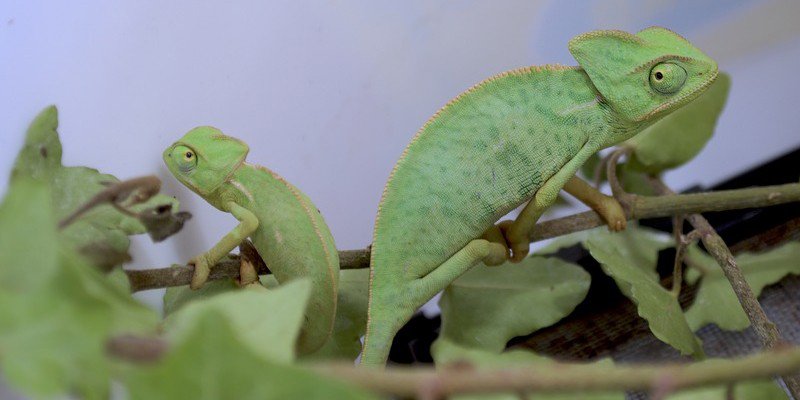 Can you put two female chameleons together?

Most of the time, two female chameleons can live together peacefully if all their requirements are met. This means each female chameleon will have access to their own basking spot, a location to drink water, and a place to sleep.

Additionally, the cage to house both of the female chameleons will need to be large. Depending on the species you have, the cage should be large enough where both of them are able to move around, especially vertically, without bumping into each other.

However, when a chameleon is pregnant, they will get fisty and will be aggressive at other female chameleons. Therefore, during this time, it’s best to separate the two female chameleons from each other.

As previously discussed, chameleons are very territorial creatures and will fight each other over it. However, there are some exceptions if you set up the cage correctly. If the cage is large enough, you can have two or more chameleons living in the same cage. The cage has to be an exhibit size cage or larger so they are far away from each other.

In addition to the large cage size, you’ll need to have multiples of everything in the cage as well. This means multiple basking light, drinking location, and places for each chameleon to sleep. If each chameleon doesn’t have want they need, they will move to that location of the other chameleon and fight for it.

When the chameleons are mating, the female and male chameleons can be put into the same cage.  During this time, the male will try to show off to the female to attract her. It will be a couple of days to even a week before the female accept and mate.

Once the chameleon has mate, it’s recommended to separate both chameleons from each other. In the wild, after the chameleons have mate, they will move to another location. In captivity, since the cage doesn’t have the open space like in their natural habitat, you’ll need to move one of them yourself. If not, the male may get aggressive and attach the female chameleon.

Can Chameleons Live with other Reptiles?

Due to their aggressive behavior, chameleons will attack any other reptiles that come to close to them. Chameleons view all reptiles and other animals as a threat. Therefore, their natural instinct will tell them to attack to defend their territory or prevent becoming prey.

Chameleons could become prey to other reptiles such as Iguanas and snakes. Putting them together will endanger your pet chameleon’s life. If the other reptile doesn’t kill the chameleon, they could inflict serious injuries on the chameleon. This could leave the chameleon becoming stressed which will eventually lead to becoming ill and even death.

Then comes the environment setting of different reptiles. Chameleons are arboreal creatures that spend their entire life up in the trees. Iguanas, on the other hand, lives on land and require sand and dirt to survive.

Therefore, if you’re planning to keep any other reptiles, it’s recommended to put them in different cages and keep them as far as possible from your pet chameleon. 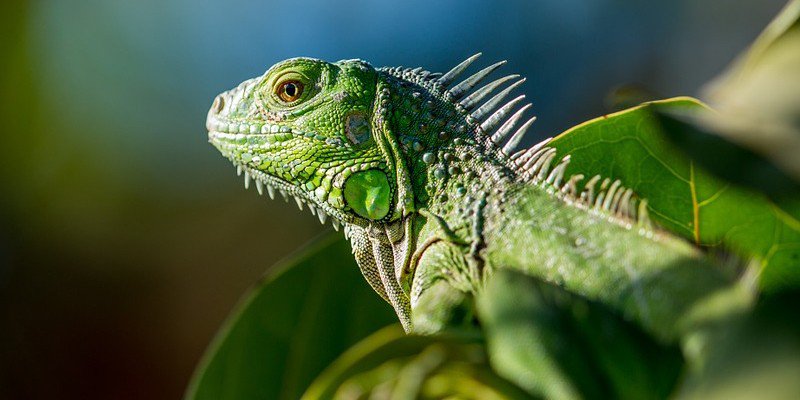 Can the same species of chameleons live together?

It’s not recommended to put them together. No matter if their the same species or not, chameleons are solitary creatures and prefer to live alone.