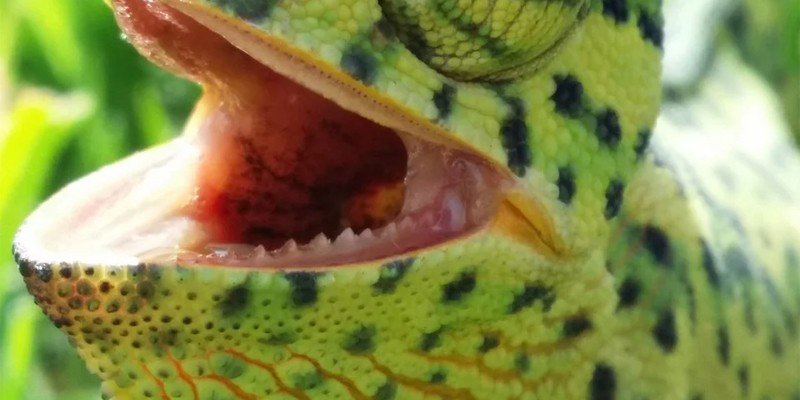 When it comes to teeth, every animal has them. It primarily uses is for chewing food, but has other uses as well. For a chameleon, most people will wonder if they have any teeth because it doesn’t show.

So do chameleons have teeth? Yes, chameleons do have teeth and it’s tiny, sharp and triangular. Unlike humans, their teeth are acrodont, which means it doesn’t have a root to hold it in place. Instead, the teeth are fused at the base of the jawbone.

The teeth of a chameleon are very important as they need them to catch and eat food, to protect themselves from predators and other chameleons, and mating. Therefore, it’s worthwhile to know about their teeth. If you’re wondering how to care for their teeth and especially if they bite, keep reading.

Chameleons have teeth that are so tiny that it’s difficult to see. Therefore, most people think they have just jaws.

The teeth of the chameleons are acrodont. The teeth don’t have any roots as humans do. Instead, all of their teeth are fused to the jawbones.

Therefore, chameleons do not have replacement teeth. When they are born, the teeth will the same teeth that they will have in their adulthood.

The teeth are sharp, tiny and triangular. These teeth are specifically made for crunching insects like crickets and locusts. Chameleons are one of those reptiles that prefer to chew their food, rather than swallowing it whole.

Besides crunching insects, they use their teeth to catch and hold larger prey. Sometimes, when insects aren’t plentiful, they will eat worms and small mammals as well. Basically, when insects are scarce, anything that crosses their path is food. 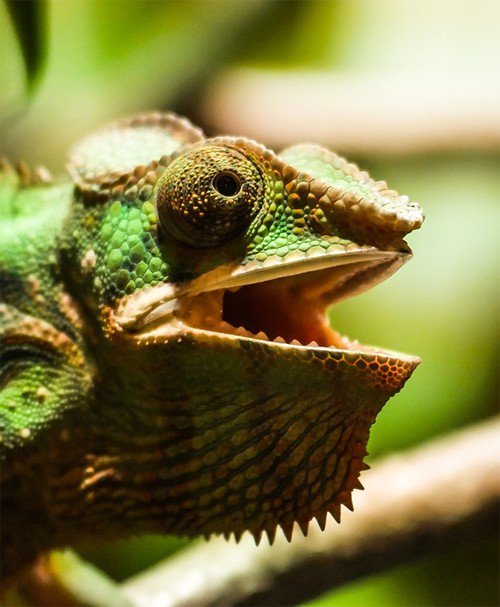 Chameleons teeth do not regrow. The teeth that they are born with will be with them their entire life. Therefore, if you notice that your pet chameleon is losing its teeth, there could be an underlying health problem. It’s important to find out right away because they depend on their teeth to catch and eat insects.

Once the chameleon loses its teeth, there will not be a way to replace it. Once the teeth are gone, the chameleons will have to live without it for the rest of their lives.

Tooth lost among chameleons isn’t common so it’s a good idea to know why it happened. That way you can prevent it from happening in the first place.

With a tooth falls out, there are usually a couple of reasons that cause that:

Chameleons that are well taken care of usually will never have any tooth issues. To keep their teeth in great shape, feed them their proper diet. Since their teeth are made of calcium, it’s a good idea to give them calcium supplements monthly.

A chameleon should get their tooth examined by a veterinarian once a year. This is to ensure their tooth is in good shape and there are no issues with them.

Can Chameleons Bite You?

Chameleons are generally not aggressive reptiles. They prefer to be alone most of the time so they are usually relaxed creatures.

Like any other animal, chameleons do become aggressive when they are threatened or need to protect themselves. When they become aggressive, they will definitely bite, whether it’s another reptile or a person.

Before they bite, there are signs they will exhibit. Some of the signs are changing colors, hissing, and hiding.

Chameleons will not bite unless they have a reason to. Below is one of the reasons why they will bite:

A chameleon doesn’t usually bite just out of the blue. Before they bite, there are signs to look out for when they are about to bite. The three main reasons are: 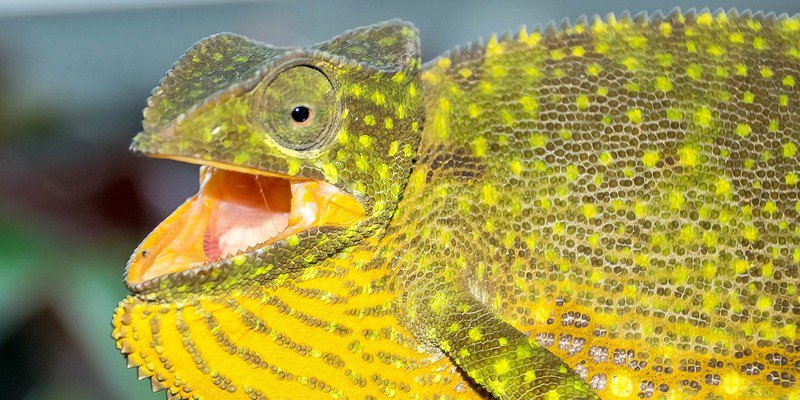 What If You Are Bitten By The Chameleon?

If you are unfortunate and get your finger bitten by a chameleon, due to instinct, you’ll probably pull your finger away quickly. Due to their sharp teeth, you’ll most likely end up with a small cut on your finger.

If your finger does get caught in their mouth, there’s no need to panic as the chameleon will more than likely open their mouth back up quickly.

How many teeth do chameleons have?

Chameleons will have on average about 15 to 22 teeth. Teeth on the front of the mouth are small and on the back are a little bigger.

Can you brush chameleon teeth?

It’s not a good idea to brush their teeth on your own. You may run the risk of them biting you. If you think their teeth needs cleaning, it’s best to take the chameleon to the veterinary. They have the proper tools and knowledge to clean the chameleon’s teeth without running the risk of getting bitten.