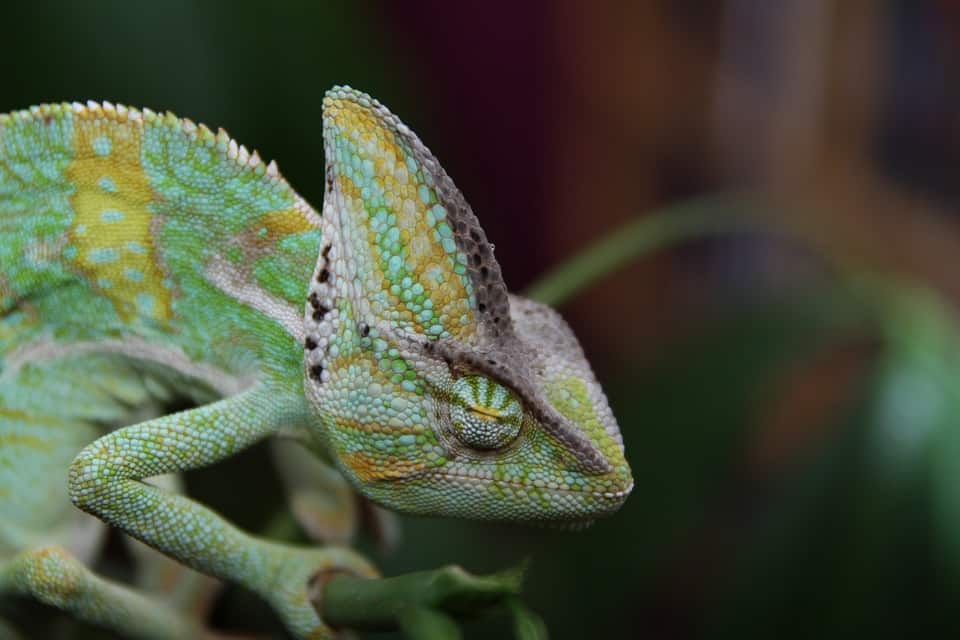 All living creatures on this planet need rest to restore their bodies.  Some sleep during the day, while others sleep during the night.  Sleep helps the body recovers from daily activities.

How Long Do Chameleons Sleep?

Like us, chameleons’ sleep time will depend on their daily activities, how much they ate, and time of year.  Also, how long they sleep also depends on the species of the chameleons.

On average, most species of chameleons will sleep for at least 12 hours each night.  The time of the year will play a factor in their sleeping time.  During the summer months when daylight hours are longer, they will sleep less.  On the other hand, during the winter months when the daylight hours are shorter, they will sleep longer.  For this reason, the lights in the chameleon cage should follow the same light pattern as in their natural habitat.

Another factor that contributes to how long they sleep is food.  Chameleons that are fed a lot of food during the day will not sleep a lot.  Too much food in their belly could cause them to feel full and prevent them from having a good night’s sleep.  It’s best to feed them a small amount of food throughout the day than one large meal at one time.  Also, feeding them at night should be avoided.  Chameleons that are fed at night tend to not sleep because it causes them to stress out and disrupt their sleeping patterns.

Do Chameleons Sleep With Their Eyes Open?

Most chameleons sleep with one eye open and one eye closed.  However, some chameleons actually close both eyes, but not completely closed. You can tell if they’re sleeping by looking at their eyes.  If they are sleeping, their eyes will look like a little slit.

Do Chameleons Sleep During The Day?

However, if you catch your chameleons closing their eyes for a couple of minutes, there’s nothing to worry about.  This could be a result of stress in their environment such as introducing another chameleon into the cage or their cage is moved to a different location.

Do Chameleons Sleep In The Dark?

Chameleon do sleep in the dark.  The darker it is the better it is for them to sleep.  In the wild, when the moon isn’t out, it will be pitched black so they’re used to that.  Also, chameleons are not nocturnal lizards so they can’t see in the dark.  For that reason, they spend the night sleeping.

When setting up your cage, find a location in your home that is almost completely dark when it’s night time.  Most people like to leave night lights around the house at night.  As long as the lights don’t directly shine on the chameleons, it should be fine.

If you live in an apartment in the city where it’s usually well lit at night, some people prefer to move the chameleons to a different location when they are about to sleep.  That is perfectly fine but watch your chameleons carefully for stress.  Some chameleons get stressed out when they have been moved around a lot.

At night, the air temperature will drop a couple of degrees or more.  As for the chameleons, since they are cold-blooded animals, they can cope with the drop in temperatures.  Their bodies will adjust their internal temperature to match the surrounding temperature.

The drop in temperature at night is needed to slow down their metabolism and induce deep sleep.  Since these are non-nocturnal animals, they need to sleep at night.

The ideal temperature is about ten degrees different from day time to night time.  A bigger change than that can cause the chameleons to be stressed.  However, certain species of chameleons can tolerate any amount of temperature change.  Veiled chameleons, in particular, are hardy and can even cope with a light frost on them.

If your chameleons can’t handle the temperature shift, it’s a good idea to buy heating lights.  Unlike regular lights, heat lights are red and just like the name implies, it produces heat.  You simply hang the light close to their sleeping area and turn the light on for the night.  Since it’s red-colored lights, it won’t affect the chameleon’s sleep.

Most of the time, chameleons don’t need heat lights at night when they are sleeping.  Like other lizards, chameleons are cold-blooded and their body adjusts to the outside temperature.

However, in some situations, you might need heat lights.  In their native habitat, which is a tropical climate, the temperature is usually warm throughout the year.  During the day, it might be around 80 degrees Fahrenheit, and at night the air temperature might drop to 70 degrees Fahrenheit.  Most species of chameleons can handle 10 degrees difference.

If you live in a cold climate zone, heat light might be needed during the winter months.  Since most homes have a central heating unit, some areas of the home might be colder than in other areas.  By placing a heat light in the cage, you can maintain optimal temperature during the night.

When placing the heat light in the cage, place it somewhere close to where the chameleon usually sleeps.  Usually, this will be close to a plant’s leaf. When placing it close to the leaves of the plant, make sure the heat setting is not too hot or you might kill the plants.

There are a couple of different heat lights available on the market.  Most will be infrared bulbs with red colors.  Some come as a combo with UVB (ultraviolet B-rays) and heat bulb all in one. UVB Lighting is essential for chameleons to process calcium in captivity.  By having both setups, you can have the UVB lights operate during the day, and the heat light on at night.

Do Chameleons Change Color When Sleeping?

Chameleons will usually turn light green at night.  This is their natural defense to blend in with their surroundings when sleeping.  Some species turn to bright green and even some bright red.  The color changes at night can also be caused by their moods as well.

In captivity, the majority of chameleons will be light green and bright green.  If they are any other colors than green, you should pay close attention to them.  This can be a sign leading to stress and illness.  Over the next couple of days, watch and see if they turn back to the light or bright green.  Investigate what could be the problem if they don’t turn back to green.  If the chameleons are sick, they will usually stay in one area day and night, and won’t eat much.  If you suspect it could be stress, try moving them to another location or remove the chameleon from the cage and place it in its own cage.

As you can see, chameleons do sleep and they need that sleep to keep them healthy and strong.  Just like day time, at night time, chameleons need the same care as well.  The cage should be located in a dark location away from bright lights and noise.  Also, the cage should be set up with plants for them to sleep under.  By mimicking their natural habitat, you will be able to give your chameleon a good night’s sleep.