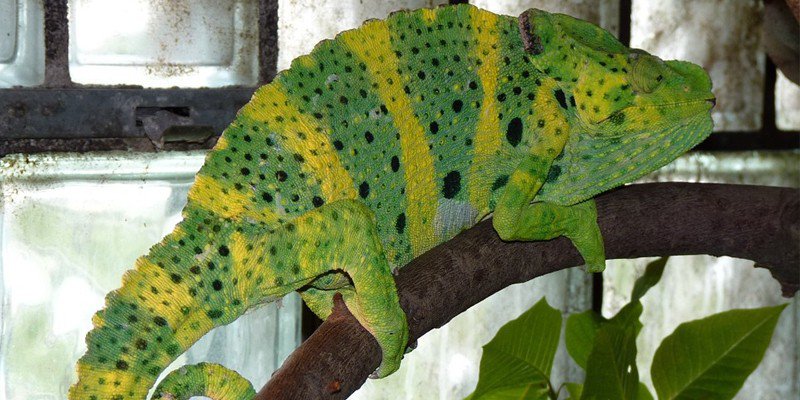 If you’re planning to purchase a chameleon or already have one, you are probably wondering how big do chameleons get.  Different species, diet, and the environment are some of the factors that contribute to their overall size.

In this article, it will explain how big a chameleon can get and what you need to keep them happy.

How Big Do Baby Chameleons Get?

For most species of chameleons, right after hatching from their eggs, they are about 4 inches long from nose to tail. The size of the female and male chameleons are no different when they are a baby.

The pygmy chameleon is one of only species of chameleons that are small.  Newly hatched babies are very tiny and delicate, often no more than 1.5cm in length. For this reason, these species need special care and attention as a baby due to their size.

Baby chameleons get big very fast and they will reach adult size in about 12 months from birth. Food contributes the most to fast growth. The more they eat, the faster and bigger they get.  For this reason, you’ll want to feed them live food that is of high quality.

How Big Do Adult Chameleons Get?

How big a chameleon usually get will be dependent on many factors such as genetics, species, and their diet. While there are over 200 different species of chameleons in the world, only a couple are kept as a pet. Below are the ones that you will usually find in pet stores and most other places that sell chameleons.

Veiled chameleons are one of the biggest species of chameleons that exist. Their large size can intimidate most people, but they are actually very friendly creatures.

Read a more in-depth article on how big veiled chameleons get.

Panther chameleons can also grow to a very large size, but not quite as large as the veiled chameleons.

The male tends to be bigger and can reach a length of about 18 inches.

The female will grow to no longer than 14 inches from the tip of their nose to the end of their tail.

In captivity, panther chameleons could get even bigger if adequate food is given to them. However, be sure to not overfeed them as an overweight chameleon will have a lot of health issues.

For their size, Jackson’s chameleons do make a good pet and why most people want to have them as a pet.

Pygmy chameleons are one of the smallest species of chameleons in existence. They are usually no bigger than an adult finger. The male will grow to about 3-3.5” (8-9cm) and the female is usually a little bigger.

They make a great pet because they are usually pretty docile and don’t mind being handled by people. However, be aware of how you handle them, like other species of chameleon, they do get stressed if handled incorrectly.

How Long Does It Take For A Chameleon To Reach Full Size?

Most species of chameleons will reach their full adult size by 18 months. However, unlike other pets, chameleons will grow throughout their life.  You won’t be able to tell the difference in size though.

After 18 months, their growth is just a couple centimeters long or so per year. Beside growing lengthwise, chameleons get big due to weight changes as well.  Chameleons gain and lose weight when something in their life affects them such as stress and pregnancy.

Also, during stressful times, they will shed as well. However, shedding due to stress isn’t good for the chameleons. If you notice your chameleon is shedding because of stress, it’s a good idea to monitor them and see what’s causing them stress. For any species of chameleon, stress is a major factor that leads to illness and even death.

How Big Does A Chameleon Cage Need To Be?

The enclosure for the chameleon should be large enough to accommodate them. This means it has room for them to move around, especially vertically. Most chameleon species will stay lower to the ground during the day and move up higher during the night.

A small enclosure will make it difficult for the chameleon to move around. When they can’t move around much, they will begin to get stressed. Stress is a big health issue for chameleons because they are easily prone to illnesses.

The correct size enclosure for an adult chameleon generally should be 24x24x48.  This gives them ample room to move around and most important of all, less stress for them.

It’s always a good idea to get an enclosure that is much bigger than the chameleon needs.  This has plenty of room to put plants and other decorations in the enclosure to mimic their natural habitat.

A more in-depth article on choosing a cage for your chameleon: Best cage for chameleon

Should A Big Chameleon Cause Any Concerns?

A big chameleon could intimidate most people.  They are unsure if the chameleon will bite them or hurt them in anyways due to their large size.  In reality, most species of chameleons are gentle and will never attack.  The only exception is they are provoked and need to defend themselves.

Before the chameleon bite you, they will give you a warning first. Such warning signs are opening their mouth wide and hissing.  The male chameleons will stretch their bodies to make themselves appear bigger. If the danger is still present and gets to close to them, they will most likely bite.

However, as for pet chameleons that lived in captivity for most of their lives, they will rarely bite a person. If you provoke them enough, they will just “punch” you with their nose.

In short, if you keep your distance, there are no concerns to worry about if the big chameleon will bite you or someone else.

Does Food Make A Chameleon Big?

While species and genetics is a big factor in how big a chameleon can get, food definitely can make a chameleon big too. The more food they eat, the bigger they can get.

Crickets and other insects are the staple food to give to chameleons. These food are high in protein and fat content.  In the wild, chameleons are well fed due to the insects that they eat. The insects will usually eat fruits, vegetables, and other plants that are full of nutrition.  Once the chameleon eats them, they too are fed with all the nutritions that the insects ate. So chameleons in the wild will usually get bigger due to the food source they have.

On the other hand, chameleons in captivity will get only as big as the food that is fed to them. Crickets and other insects bought from the pet stores usually are not full of nutritions like those in the wild. Insects kept in the stores are fed minimal food sources, just enough to keep them alive to be sold. For this reason, you shouldn’t feed insects to the chameleons directly from the store. The insects should be gut loaded first before being fed to the chameleons.

While food can make a chameleon big, it’s not a good idea to get them too big. A chameleon that is overweight can have a lot of health issues.

A big chameleon may be intimidating at first, but for the most part, they are gentle and friendly. The only time they can get aggressive if they are provoked in any way and feel endangered, they will protect themselves by biting you.  To prevent this from happening, give them space and keep your distance. The big chameleons will be happy and you won’t need to worry or fear about their size.