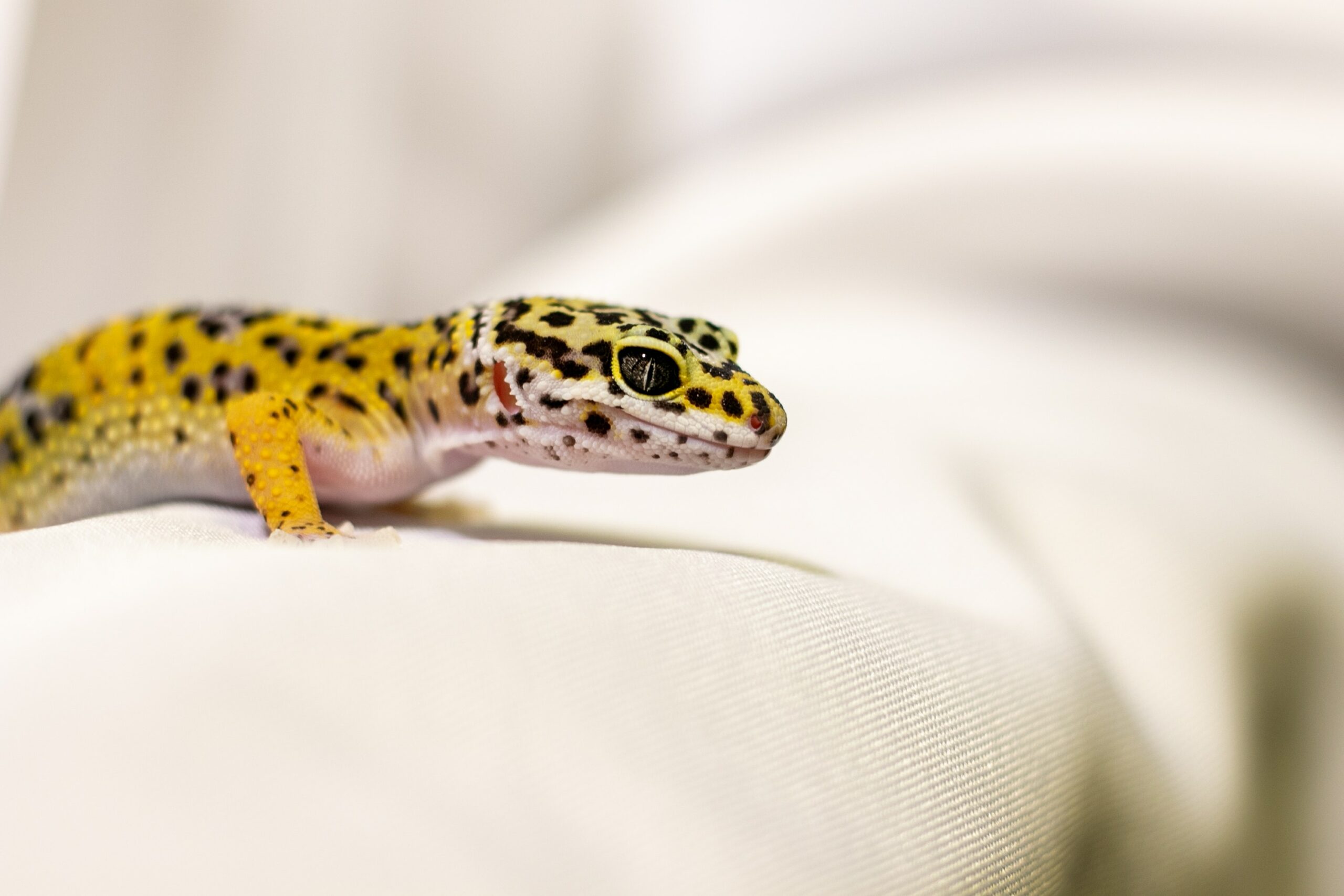 A leopard gecko is measuring about 20 centimeters including tail. The ground color is grayish yellow with black or brown spots, which can differ between individuals. Juveniles are pale yellow with dark transverse bands. The skin has a warty appearance, with numerous bumps all over the body and tail. Leopard geckos have movable eyelids.

Most geckos have adhesive lamellae on the underside of the toes. With which the animals can walk with amazing ease over smooth surfaces such as glass, for example. The leopard gecko lacks these, and so these animals cannot walk on smooth surfaces like other species of gecko.

The tail is used to store fat in times of abundance, that is why it is so thick. When there is less food to be found, the leopard gecko relies on the fat reserves stored therein and their tails will shrink.

Leopard geckos grow quickly and can be fully grown within a year and a half to two years. The animals shed their skin in pieces, not in 1 whole like snakes but piece by piece.

Leopard geckos are primarily nocturnal, emerging from their shelters at dusk and returning to their burrows. During the day, the animals may still want to emerge from their hiding places to warm up in the sun. 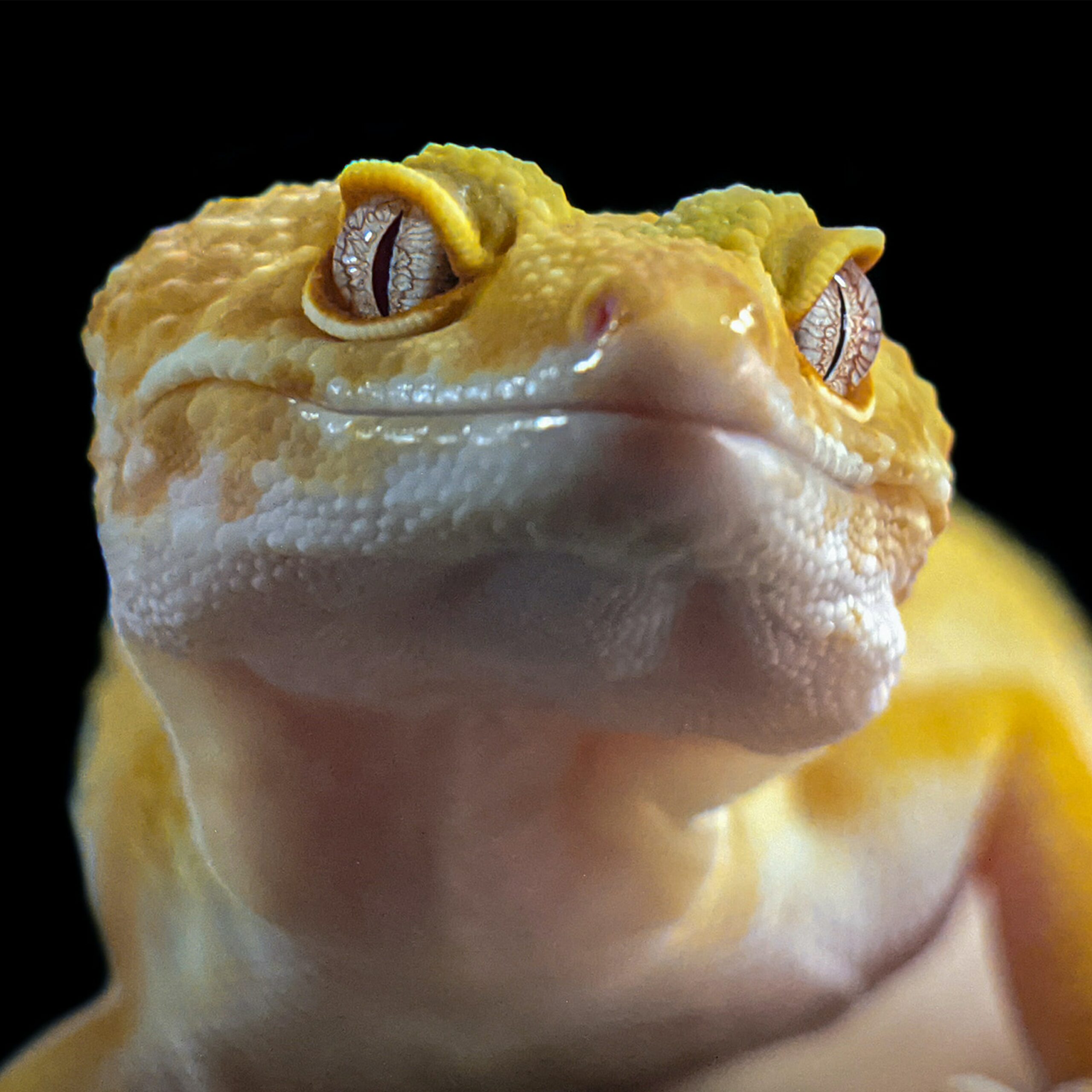 Leopard geckos are found in the deserts and grasslands of Iran, Afghanistan, Pakistan and western India. The habitat of the leopard gecko is characterized by the absence of water and dry areas. However, the burrows and crevices in the rocks where the animals hide during the day are humid. The animals mainly drink dew, which forms during the night.

Leopard geckos are primarily bottom-dwelling and will sometimes climb trees, rocks and branches.  With proper care, leopard geckos can live about 20 years or even older.

A pair of leopard geckos requires a terrarium of 80 X 40 X 40 Centimeters at least. Bigger is always better, especially if you want to keep more than two animals. Be careful, male animals are very territorial, it is best to house 1 male per enclosure, otherwise they might fight eachother.

During the summer you should give the animals 12 to 14 hours of light per day. Make sure the animals are also exposed to UV radiation for their health. It has been previously reported that leopard geckos are twilight active, they may also want to come out occasionally during the day to warm up their bodies.

The temperature in their terrarium should be around 28 degrees Celsius. Provide a place where the animals can warm up. This warm place under the lamp could be 30 to 35 degrees Celsius warm.

The warmest place is best made on one side of the tank so the gecko can arrange its own temperature by staying under the lamp and on the side of the lamp. This is the most important in this leopard gecko care guide.

The substrate for leopard geckos can best consist of coarse sand, or special calcium sand. The latter is a product that is digestible if the gecko will eat it. The ground cover should be about 5 to 10 inches deep, so that the animals can dig a burrow.

Try to create a number of hiding places and barriers in the tank that allow the animals to hide, this prevents stress and is better for their wellbeing. Hiding places can simply consist of hollow pieces of cork, fake plants or tacked flat rocks that the animals can crawl under.

In the coolest corner of the enclosure, it is best to place a hiding cave filled with moist peat or peat moss. This mimics the natural situation where the animals hide in deep rodent burrows. The higher humidity promotes molting and ensures that the small pieces of skin on the toes also shed easily. In addition, this hiding place can be used by female geckos for depositing eggs.

A water bowl should not be missing, although leopard geckos are not naturally used to drinking standing water, they sometimes want to take a sip. Of course, make sure that the water bowl is not too deep, and that the animals can easily walk out, this will prevent drowning accidents.

Plants, both real and artificial, can be placed in the terrarium for decoration and to add hiding places. However, live plants are sometimes eaten by crickets which are feed to the geckos, therefore prefer to choose artificial plants.

Leopard geckos rarely bite when you try to handle them. However, they can bite firmly if they want to. Most leopard geckos do not like to be handled; they are not cuddly animals. To express their displeasure, the animals can sometimes emit yelping or screaming sounds to scare off. Handling is only necessary when moving the animals to another enclosure, or when cleaning the terrarium. Although some animals may be more comfortable with being handled, it is not good for your gecko’s health to be removed from its enclosure and subjected to temperature changes. Going from 35 degrees Celsius in the terrarium to 18 degrees Celsius in your living room is a big difference! These temperature changes can result in pneumonia for instance.

If you want to handle your leopard gecko, support the animal as much as possible with both of your hands. Never lift a gecko by the neck, legs or tail! A leopard gecko’s tail can break off if the animal is held by its tail. A broken off tail will grow back and is no reason to panic at first. Fighting males will also sometimes bite each other’s tails off. Once a tail has grown on, it can no longer be shed anymore.

The diet of a leopard gecko can include crickets, grasshoppers, cockroaches, mealworms, other insects or insect larvae. Keep in mind that as your leopard gecko grows the diet will also need to be adjusted, you will need to feed more and larger animals to make them happy.

Crickets can be purchased in various sizes at terrarium specialty stores or even in grocery stores. Feed crickets that are about one-third the size of the lizard’s mouth width. Crickets are true escape artists and once they are loose in the house, they are difficult to find. Feed just so many that your leopard gecko will eat them all. Will they also eat wild crickets?

Argentine bush cockroaches or dubias are a very good food to give to your lizard. These animals themselves can also be very easily fed vegetables and fruits to make them even more nutritious. Dubias are not pests if they escape like some other cockroaches.

Mealworms are also eagerly eaten by leopard geckos. However, these animals possess little nutritional value and thus cannot be used as a staple food. Eating too many mealworms can lead to obesity and calcium deficiencies, as well as sometimes causing constipation (intestinal blockage).  Leopard geckos also eat dried mealworms.

Caterpillars such as those of the wax moth, silk moth or pintail butterfly are a good food for geckos. The caterpillars are nutritious and easy to digest.

They can also eat roaches. These creatures are a very good food for your leopard gecko. They can eat a lot of them, but how many?

Food animals for sale in terrarium stores are somewhat one-sidedly fed, so they should always be powdered with a calcium and vitamin supplement. To process calcium into a usable building material for bones and eggshells, vitamin D3 is needed. This vitamin is produced in the skin under the influence of UVB rays.

It is therefore necessary to provide a source of UVB lighting in a leopard gecko terrarium, despite the fact that they are predominantly dusky animals. This can consist of a fluorescent tube or special spotlight. 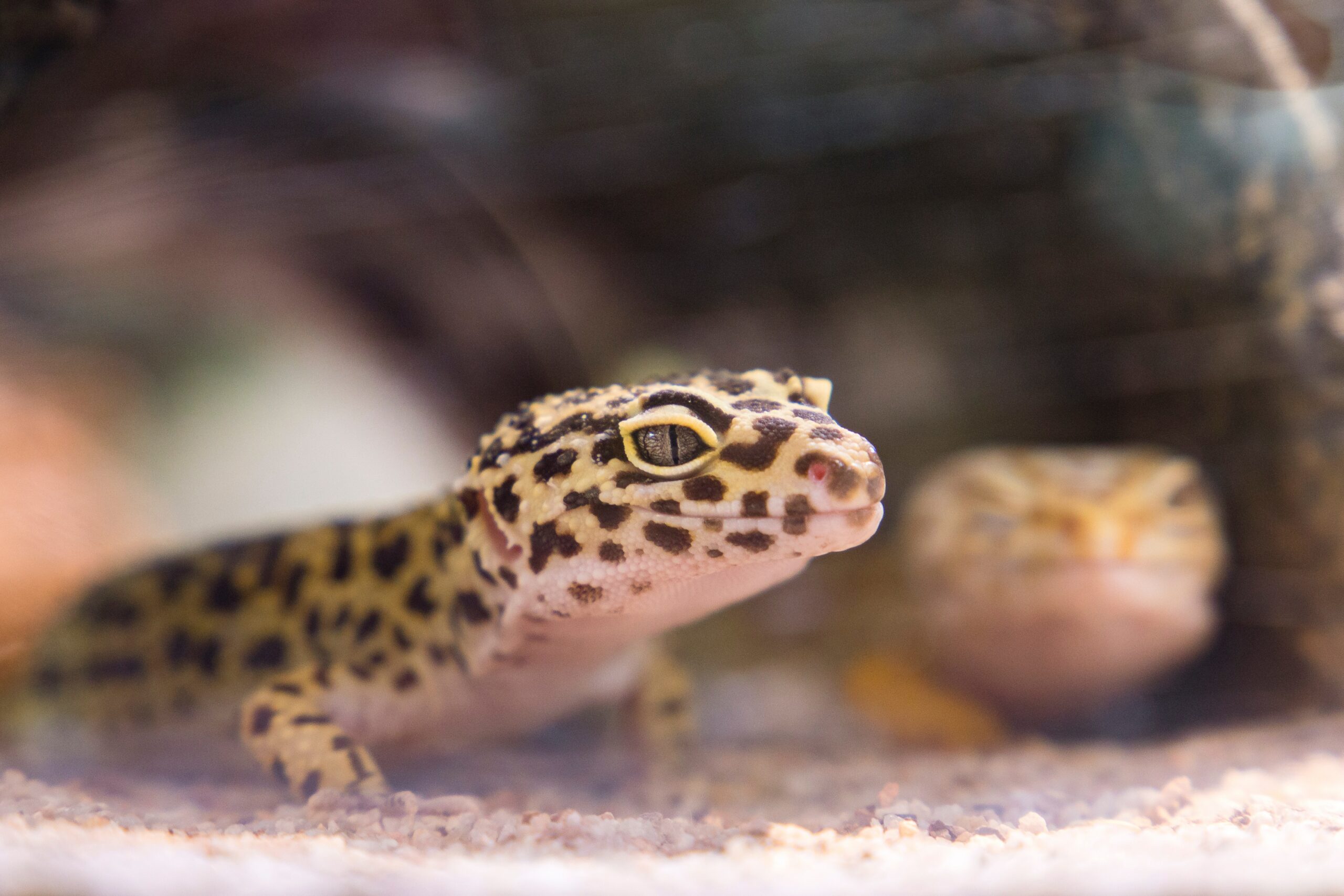 The habitat of the leopard gecko is subject to seasonal changes in the wild, so the animals go through a winter every year. Temperatures in the winter months can drop to near, or even below, freezing in their natural habitat.

For the lizard’s health, it is important for the animal to hibernate. Often lizards want to eat poorly during the winter months and if the temperature remains high the body processes continue as usual, the lizard will get thin because the animal is consuming more energy than it gets through its diet.

Besides the health problems that may arise, hibernation also affects the fertility of the leopard geckos, during the winter period the female’s eggs mature and sperm are produced in the male.

During the winter months, try reducing lighting from 12 to 14 hours to 8 to 10 hours. Begin gradually reducing lighting in November until in December the light is only on for 8 hours. At the end of January, the lighting hours can be increased again, as can the temperature until, in early March, everything is back to normal.

Animals younger than 2 years and animals that are not in full condition are best kept at normal temperatures during the winter months, they should be fed well.