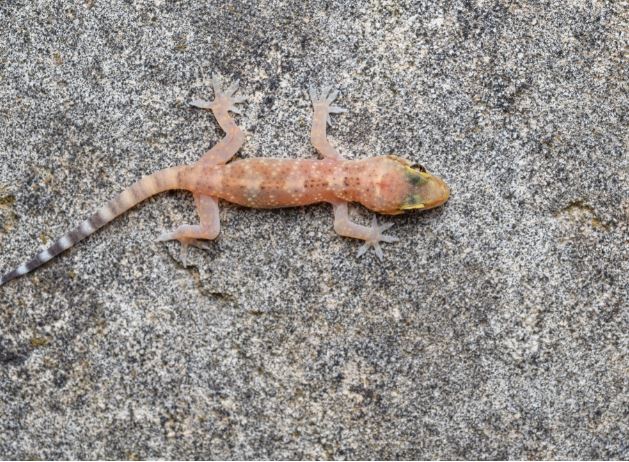 The scientific name of the mediterranean house gecko was first proposed by Carl Linnaeus in 1758. Originally the name Lacerta turcica was used, the species designation turcicus freely translated means “of Turkey” and refers to part of its range.

You may also want to read about the fat tail gecko.

The mediterranean house gecko is mostly white-yellow with a leopard-like pattern of brown spots on its back and a brown and yellow banded tail. There are fewer variations than in the tjitjac (Hemidactylus frenatus) but its range is also considerably smaller. The skin of this species is slightly translucent and pinkish in color. This makes the eggs of pregnant females easy to see.

The gecko grows up to 16 centimeters long including tail, the toes have small lamellae (adhesive pads) and skin flaps over the toes. On the flanks and tail root are small spiny bumps. The eyes have a vertical pupil.

The mediterranean house gecko is a twilight and nocturnal species that then searches for insects and larvae. Lizards living on the edges of cities gravitate to the insects, which in turn gravitate to light, making it appear as if the geckos are seeking humans. The males lure the females with wailing sounds similar to a cat’s meowing. When the males fight over a female, or when touched, they may also produce grunting or screeching sounds. The eggs are nearly round and measure an average of 1 by 1.5 centimeters. When the young lizards crawl out of the egg, they are 4 to 5 centimeters long.

The mediterranean house gecko has a wide range and is found in parts of Europe in the countries of Portugal, Spain, France, Italy, Albania, Greece, Malta, Croatia, Bosnia and Herzegovina, Montenegro and Turkey. In addition, the species occurs in Africa in Morocco, Algeria, Tunisia, Libya, Egypt, the Canary Islands, Somalia, Eritrea and Sudan. In the Middle East, the lizard has been found in Israel, Lebanon, Jordan, Syria, Yemen, Iraq and Saudi Arabia, and in Asia in Pakistan, India and eastern Russia. Finally, in the Americas, the gecko is known from the countries of Panama, Puerto Rico and possibly Belize.

The Mediterranean gecko was introduced by humans to Bermuda, Cuba, Mexico and the United States, where it was probably introduced between the 15th and 18th centuries at the hands of human seafaring. The slave trade or mass immigration around that time contributed to this. The European tjitjac is able to survive at temperatures as low as 10 degrees Celsius, unlike other geckos.

Its habitat includes Mediterranean scrublands, rocky environments, dry caves and coastal marshes. The lizard can also be found in human-adapted regions such as plantations, rural gardens and urban areas.