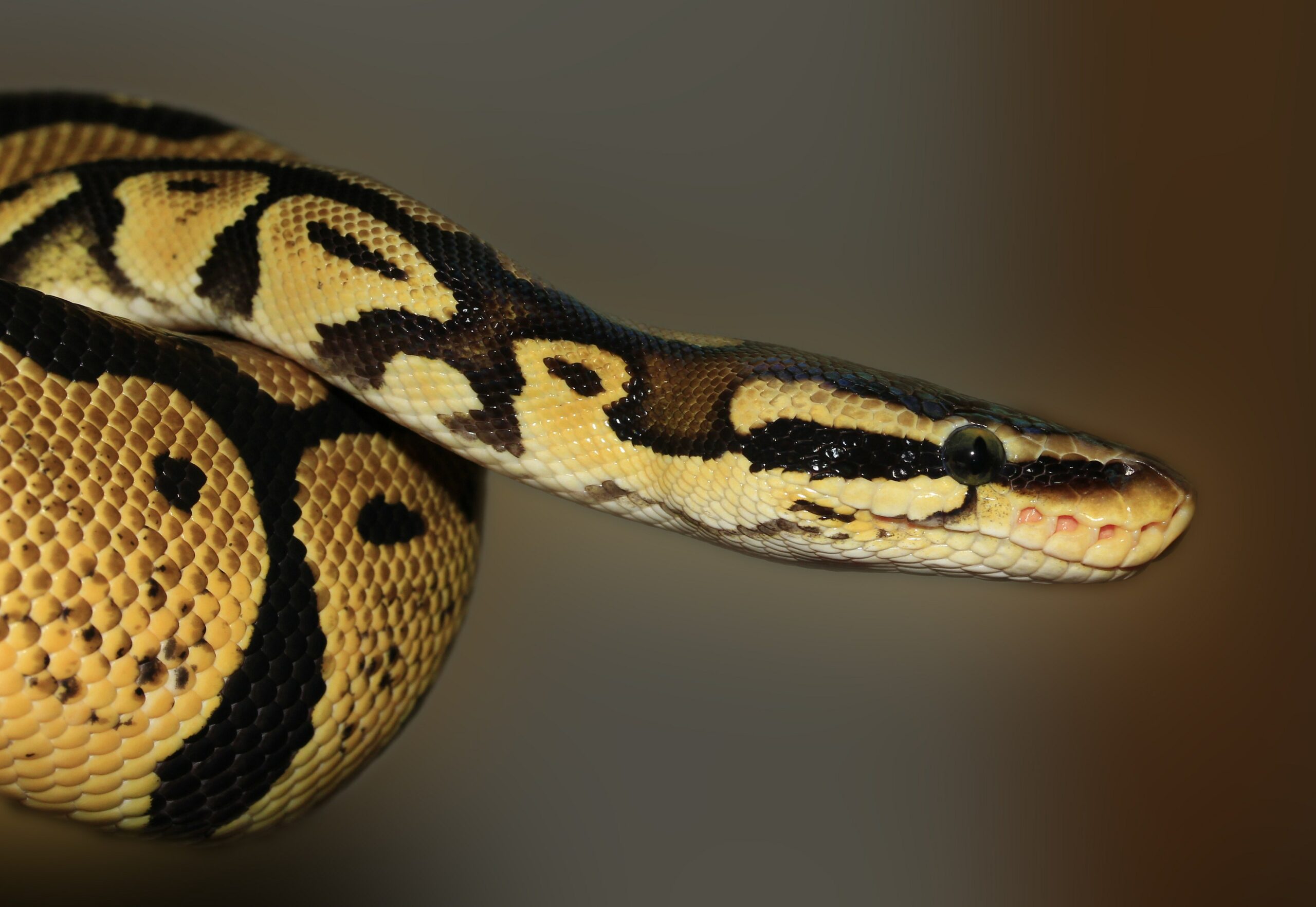 Reptiles are increasingly popular as pets. Buying a small snake is also high on the list of many enthusiasts. But which species of small snakes are actually commonly sold and what is a good choice for beginners?

This overview of popular snake species can help you to find your new pet snake. We also give you some practical tips about what to look out for when buying your new snake. So you can get started with your new pet snake in a responsible way!

The King python (Python regius) is an immensely popular snake better known internationally as the ball python. They are small snakes (up to 150 cm) and are very popular with breeders, resulting in many genetic variations in colors and patterns.

Breeding is primarily aimed at obtaining the most unusual and rare patterns of snake. The different genetic variants are also called “morphs.” Think of variants like the ‘piebald,’ ‘banana,’ or ‘champagne’ which are very popular. Pythons are very suitable for beginners, with a few care considerations.

First, you should know that King pythons can be picky eaters. They don’t eat much during their mating season (November – February), and changing food types (for example, from mice to rats) can also cause feeding problems. Sometimes they won’t accept the new food. On top of this, getting the right humidity in the terrarium is a complicated job. However, there are ways to regulate humidity, although it will take some work to figure it out.

The cost of purchase depends entirely on the type of morph (genetic variation), colors and patterns. The price for a King python is highly variable and ranges from 40 euros to over 1000 dollars per snake. Maintenance costs are around 50 dollars per month (for feed and accommodation). 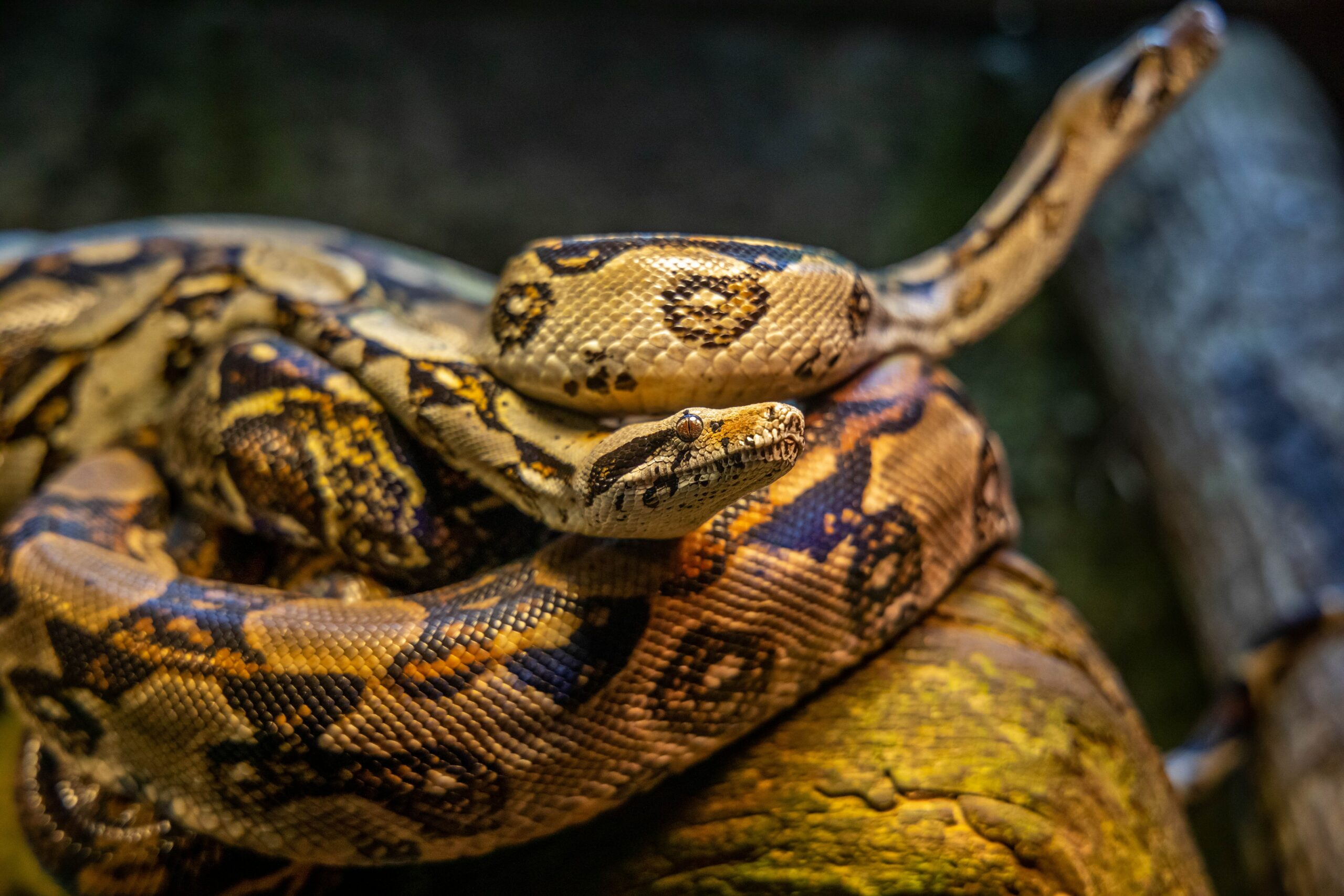 The King Snake (Lampropeltis) is a slightly larger snake (150 – 180 cm) than the King Python, which despite its length, it is a thin snake. King Snakes are highly sought after for their beautiful appearance, with colorful patterns that will certainly make a special impression.

These snakes are immune to the venom of almost all other snake species. By killing other snakes in the wild, they have gained a reputation as venomous snake cleaners in their natural habitat. Thus, it is important to keep King snakes separate from other snakes, otherwise they may eat their friend. When breeding, it is essential to feed the female before adding the male, otherwise the male may be eaten. Obviously, the animals are best kept solitary without any other snake.

It is important for starters to know that this animal does not want to be disturbed  during and after eating. Leave the animals alone for at least 2-3 days after feeding to reduce stress. Otherwise they may regurgitate their food.

Prices for the King Snake range between 50 dollar and 250 dollar per snake, depending on the specific breed and color. An albino King Snake will be more expensive than a regular one. Periodic costs include food and terrarium maintenance will cost you about 50 dollar per month. 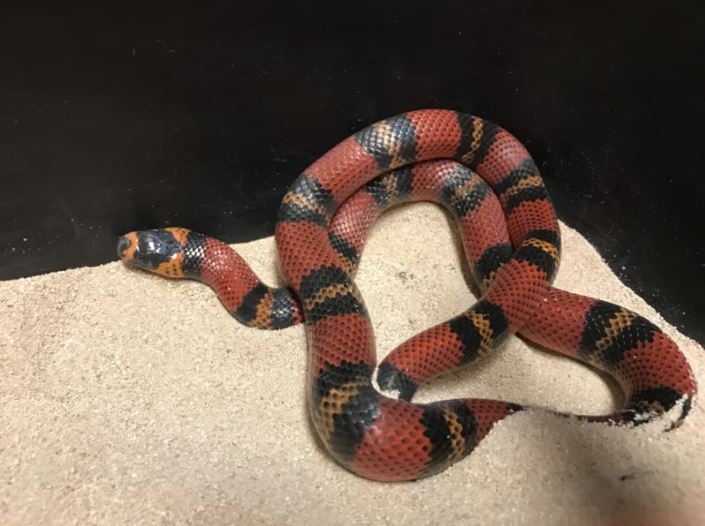 The Corn Snake or Red Rattlesnake (Pantherophis guttatus) is according to many keepers the ideal snake for beginners, especially since the species is a small snake (maximum 140 cm). The enclosure of these small snakes does not have to be very large (minimum 80 x 50 x 50 cm, depending on snake size), which is great for smaller households.

Corn snakes will come in many color variations, so they certainly do not always have to be red like the normal color that they have. The animals do not get very old compared to other snake species, the average age of the Corn Snake is only 8 – 15 years, which isn’t old for a snake.

The snakes’ small size does not make them herbivores. After all, they are true carnivores and will ea  mainly small mice. For the set-up of the terrarium, it’s important to give this species enough space to climb on. So it is good to choose a relatively high terrarium with branches, so that the natural instinct is satisfied in the habitat offered to them. 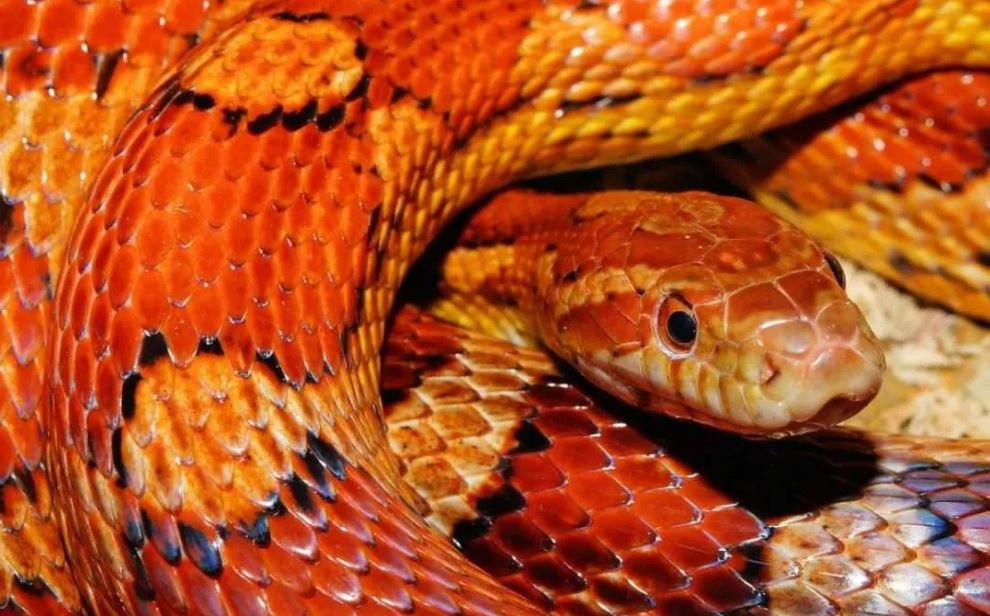 The Garter Snake (Thamnophis) is a genus of relatively small snakes (50 to 80 cm) that are also great for snake fans. The species is active during the day, which will make it extra fun for its owner to watch`them.

Like many snake species, Garter Snakes come in many color variations and patterns. The background colors can range from red to yellow, all the way to darker colors like even black.

Annoying about this type of snake is the fact that they are extremely good at escaping from their terrarium. When you know the importance of having ventilation holes in the enclosure, you understand that a terrarium will have to be well constructed to keep these small snakes inside. After all, you don’t want to accidentally find your pet in your bed while you’re sleeping.

It’s also good to build in temperature gradients in the terrarium and take into account the temperature cycle (winter with lower temperatures) which they have in their natural environment. For example, place lamps on one side of the enclosure and leave the other part of the enclosure without lamps.

Daily care comes only down to checking humidity and temperature. Water should also be changed every day and food that has not been eaten should be removed in a timely manner so it won’t rot. Furthermore, feces should be removed. Changing the bottom can be done once a month or once every other month.

Another example of one of small snakes is the milk snake, which is a different species from the king snake. It’s native to the U.S. and Mexico. Tthis snake has rings of red, orange, yellow, white and black, which sometimes gets them confused with the venomous coral snake. These small snakes are non-venomous and are very docile.

These small snakes are easy to keep and are very friendly. They can be handled well and aren’t agresive at all. They are also one of the easier to keep small snakes. Because of their size, they don’t need a lot of space. 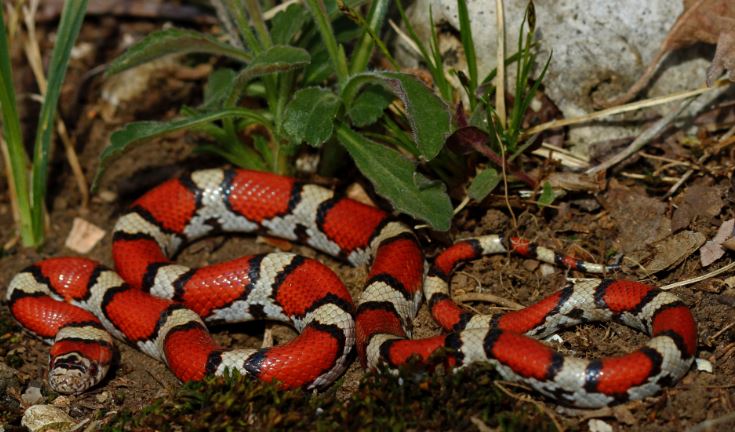 Buying a Snake That Suits You

The above overview of popular small snakes has hopefully given you some inspiration for adopting your own snake. We think it’s important that you go into this with awareness and do your research.  Therefore, we would like to help you with some practical tips, which are important when buying a snake. At least consider the following things:

Go for a non-venomous snake: Should you accidentally get a bite, it is best not to suffer any consequences or even die. Beginners should therefore take no chances and go for an easy to keep species, such as the King Python, Corn Snake, or Garter Snake.

Learn about behavior and natural needs of your snake: So you can better arrange their habitat and keep them happy. Assessing danger from possible bites is also a lot easier when you know your snake. The risk is usually low, but it is always possible.

Remember also small snakes can get quite old: So it is not a decision you should make quickly or out of impuls. Most snakes live to be 20 years or older, making them buddies for life and quite a commitment for the years to come.

If you keep these simple practical tips in mind when buying your new snake, along with the seller’s advice and after you have done your own research, you will be succesful. We want to wish you goodluck in your search for the perfect snake. Feel free to send us an email about tips for keeping or buying a snake.