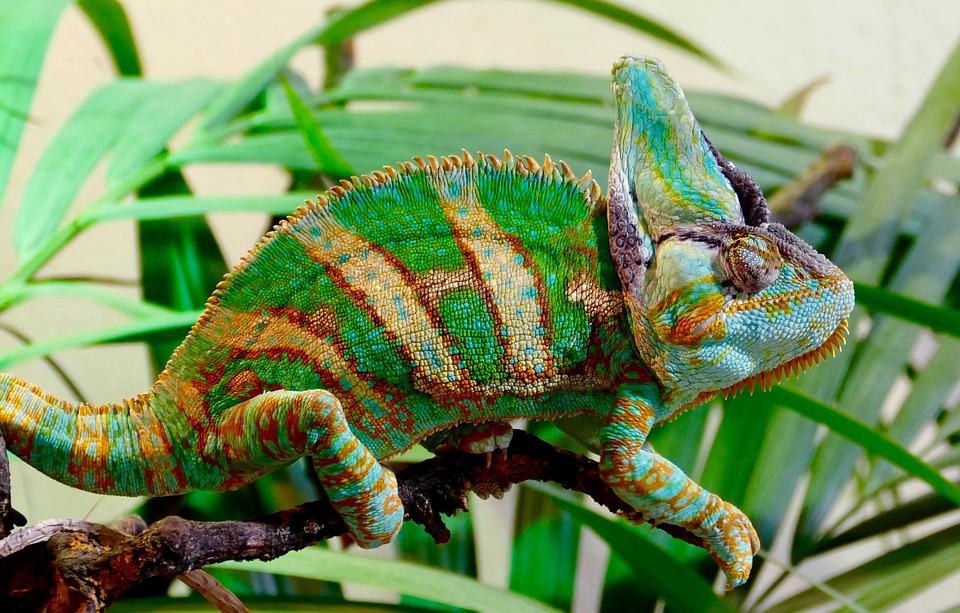 When it comes to sleeping, most animals tend to find places they feel secured. This could be up in the tree, deep underground, or even sleeping out in the open as elephants and lions do. For a chameleon though, especially those in captive, they will likely try to find a good sleeping spot where they feel secure as well.

Chameleons in captivity will likely sleep just about anywhere they feel comfortable. This means on the rocks, under leaves, and even clinging to the side of the cage. Since they know there are no predators, they feel secured to sleep anywhere in the cage.

Where Do Chameleons Sleep?

Depending on the species, chameleons can sleep anywhere in the cage. Some like to sleep in the trees, some sleep under the plant’s leaves, and some even sleep vertical clinging to the cage’s wires.

For most chameleons, they will sleep at or near the place they occupy during the day. Some individuals will move higher or lower when they are about to go to sleep. They will usually sleep in places they feel secure, a place to shield themselves from predators and cold temperatures. This usually includes under large plant’s leaves, at the base of the tree branches, and even under large rocks. For this reason, you should have a lot of plants and rocks in the cage so they feel secure when sleeping.

For baby chameleons and juveniles one, they will mostly sleep clutching a branch, under a large leaf. They provide protection from predators and prevent them from losing too much heat. As they get older, some will still sleep under a leaf, while others might find a more suitable place for their size.

Regardless of the location, they should be able to sleep at the same location throughout the night. If you find that your chameleon is moving around often at night, there might be something distracting them or they might be stressed out.

Some chameleons will not sleep at night if there are too many other chameleons in the same cage. Chameleons are not social animals and prefer to be alone most of the time.

Another reason could be small cages that are preventing them from sleeping. If the cage is too small, they could be stressed by the small space they have to sleep. If you find that might be the case, buy a larger cage or move them to a larger cage.

Where Do Chameleons Sleep That Are From Tropical Region

In captivity, most species of chameleon will sleep at places just like in their natural habitat.  This will be under the leaves of trees and plants.  Chameleons will look for plants and trees that have large leaves or large enough for them to go under.  For that reason, the leaves of the plants and trees in your cage should be large enough for them to stay under.

Some of the plants with leaves that your chameleon will love are Croton, Ficus, and Golden Potus.  There are many other plants with a large leaf that you can use, but I find these have the best results for the chameleon.

Besides plants, in the chameleon cage, you use the Rubber Tree or Rubber Plant.  These are trees with large leaves that chameleon love to hide under.  This tree can get big and tall fast. To keep them at the optimal height and size, prune the branches and leaves every few months or so.

Where Do Chameleons Sleep That Are From The Desert Region

Chameleons from the desert regions will likely sleep on the underground.  This dry region will lack the trees and plants like in the tropical region.  For that reason, the location where they will be sleeping will be under large rocks or desert plants.  Some species like the Namaqua chameleons will actually dig a hole in the sand dunes to sleep, with only their nose sticking out from the sand.

Since species of chameleon from the desert region are not used to seeing trees, they will mostly stay on the cage floor.  For that reason, you should add what’s naturally found in their natural habitat.  Things such as large rocks, cactus, and desert plants.

Chameleons seem to pick different locations as they get older. The older the chameleon is, the higher up they tend to sleep.  Whether it’s a tree or a plant, they will find the highest place on the object to sleep.  By being further up on a tree or plant, they feel more secure when sleeping.  They can keep a lookout for predators and other dangers that are nearby.

Baby and juvenile chameleons tend to stay closer to the ground when sleeping.  In the cage, if have rocks and plants on the cage floor, they will sleep on the rock and other objects.  For that reason, you should create a substrate for them which includes things that you will find in their natural habitat.

Where Do Chameleons Sleep During The Day?

Where Do Adult Chameleons Sleep?

If you have a lot of adult chameleons in the cage together, it could be hard for them to find a place to sleep.  Most chameleons like to sleep in an area all by themselves.  Whether it be in the tree or under a rock, they like to sleep alone.  For that reason, make sure the cage is large enough to accommodate all of them.

If there are a chameleon baby or juvenile in the cage, the adult chameleons will usually move up to an area higher than the baby and juvenile chameleons to sleep.

Where Do Baby Chameleons Sleep?

Baby chameleons will most likely sleep under large foliage leaves of plants.   They will tuck themselves as close to the inner side of the plant.  This is also where they will spend most of the day as well.

When they are born, they are left to fend for themselves.  Due to their survival instinct, they will head straight for cover, either under leaves of plants or leaves overhanging a tree branch.  They will spend their time here not eating anything for a couple of days.  This is possible due to the yolk sac that’s still attached to them during birth.  After the yolk sac disappears, the baby chameleons will start moving out from under the leaves to find food.

In captivity, when they are born, they will look for a large leaf to hide under.  This is why it’s important to have trees and plants with large leaves for them to hide under.  They will spend the first couple days under the leaves just resting during the day, and sleeping at the same location at night.  After a couple of days, once the yolk sac disappears, they will start to wander out from under the leaves.  They will move from one location to another investigating the area.  Once they are about to go to sleep, they will usually head back to the location where they have been at for the past couple of days.

Where Do Chameleons Sleep When Nighttime Temperature Is Cool?

When it’s cool, chameleons will tuck themselves under a large leaf.  Being under the leaf provide them warmth.  The leaves will prevent the heat produced from their body to escape into the atmosphere.

During the winter months, the temperature in your home should be around 65 to 70 degrees at night.  If it drops below 65 degrees, you’ll need to add a heat lamp to keep them warm.  For most species of chameleons, they can’t tolerate the cold very well.

A home that has central heating system will not have the same temperature in each room.  Some rooms will be colder than others.  Chameleons that have been exposed to cold for a long time will be stressed and their health will deteriorate.  To prevent any health issues arising from the cold weather, install a heat lamp for them.  I recommend Exo Heatglo Infrared Lamp, which you can buy from Amazon.  I personally use it myself and it has been trouble-free for the past 3 years now.

For species from the desert region like the veiled chameleons, they are able to handle the cool temperature, even to the point where frost can form.

Where Do Chameleons Sleep When Nighttime Temperature Is Warm?

During the warmer months, chameleons will sleep under the leaves of plants and trees as usual.  With warm weather, you won’t need to add any heat light to keep them warm.  However, some chameleons still prefer some heat at night though.  You can test to see if they need the heat light or night by placing on top of the cage.  Check every night to see if your chameleon is sleeping under the heat light at night.