If you own a bearded dragon or planning to own one, sooner or later, you’ll encounter your bearded dragon turning black. They can either turn just their beard black or their entire body. When this happens, you may start to panic and wonder why they are doing this.

In this guide, we’ll go through each of the reasons why they turn black. So the next time, your beardie turns black, you know the reason why and if any action needs to be taken.

Below are the 10 reasons why your bearded dragon turns black and what to look for:

This is usually the main cause for bearded dragons to turn black. When they turn black, they are trying to maintain their body at the correct temperature.

Usually in the morning when it’s cold, they will normally turn black. By turning darker, they are able to absorb more heat.

During the day, if you notice your bearded dragon is black for most of the day, there could be an issue with the basking lights. It’s either not producing enough heat or the bulb is burnt out. 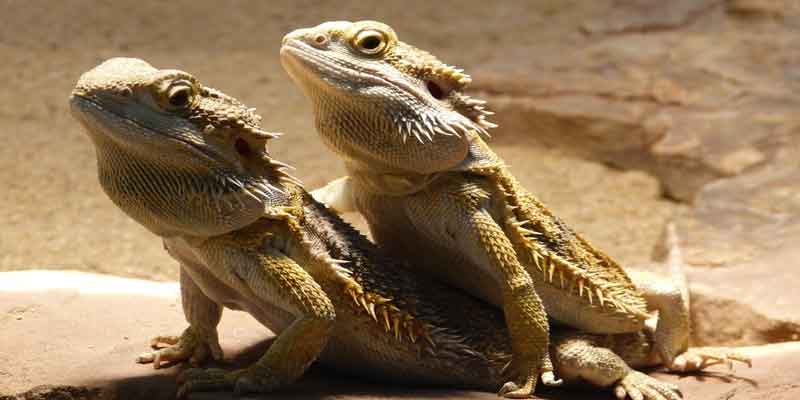 If your bearded dragon is a male and it’s mating season, their beard will darken signifying it’s ready to mate.

For a male bearded dragon, this will usually happen after they are 5 months or older.

Besides turning black, other signs to look for are anxious behavior and head bobbing.

When you see them display all of these signs, the bearded dragon is looking for a mate.

While males usually turn black, female bearded dragons can turn black as well during the mating season. However, it’s less likely to occur.

The mating season for bearded dragons is a month after the brumation period.

In the wild, bearded dragons will start brumating when the weather gets colder.
This will be around the month of November and lasting until February.

Therefore, it’s likely in the spring when you should take notice when they turn black. If so, you know that your male bearded dragon is looking for a mate.

There are times when your bearded dragons will become extremely stressful. When this happens, they may turn all black.

Extreme stress could be caused by many things. Below are some things that could cause them to become very stressed:

To help calm them down, you’ll need to find out what the issue is causing it first.

If it’s other pets in the house, you move the enclosure to another part of the house. If that’s not possible, put a barricade around the enclosure so the pet can’t get to them.

Once all the stressor is removed, the bearded dragon will become calm and turn back to its regular coloration. This might take a few days or so.

When your bearded dragon is sick or has an illness from a health problem, they will turn black. This is their way of communicating to you that they are not feeling themselves.

However, when they are sick, bearded dragons will usually disguise it. There’s a great reason why they do that. In the wild, predators prey on the weak and sick. If the bearded dragon is sick and they seem that way, they’ll end up an easy meal for a predator.

In captivity, your bearded dragon may do the same as if they were in their natural habitat. Therefore, it’s important to look for other signs as well that they are sick.

Other signs of sickness could be hiding, refusing to eat, and being aggressive at everything.

If you are still unsure what’s wrong with them, it’s best to take them to the vet as soon as possible.

Bearded dragons are quite aggressive when it comes to protecting their territory. When they become territorial, they may become black. Depending on how much aggression they have, they’ll either just have their beard darken or their entire body black.

This usually happens between two male bearded dragons. In the wild, if the one that’s invading the other bearded dragon territory, they may simply back off and go elsewhere.

However, in captivity, if there are two males in the same cage, there could be a problem. Since they won’t have anywhere to go, both bearded dragons will turn black and may even start to fight each other. Bearded dragons are not aggressive creatures and will try to scare their opponent first before engaging in a fight.

When they are trying to display dominant behavior, the bearded dragon might turn black.

This mostly happens if there are two or more bearded dragons living in the same enclosure.

When they are all in the same enclosure, each bearded dragon will turn black and show other signs as well. They may puff up their body, being really aggressive, bobbing their head, and laying on top of the other bearded dragon.

This behavior is actually dangerous for all the bearded dragons. For one, the less dominant bearded dragon will end up being stressed out by this whole ordeal.

The other one is losing appetite and not getting any basking time that they require. 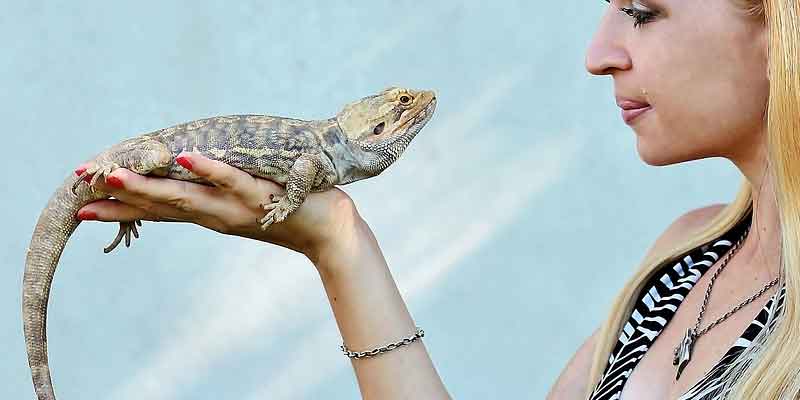 Bearded dragons are a popular pet to own due to their fun behaviors. These reptiles are very smart as well.

Sometimes, they may get bored and want you to play with them. This is especially true if you’re the type of person who plays with them often. They tend to get used to it.

When you put them back in their enclosure, your bearded dragon starts turning black! This is a sign that they still want to play.

Other times, they will want to come out of the enclosure. You may notice them at the glass staring at you with a black beard.

If you suspect your bearded dragon is black for no obvious reason, this may be the reason.

To see if that’s true, simply take them out of their enclosure. Once they are out of the enclosure, they will turn back to their normal color.

Again, bearded dragons are very smart creature and this is one of the ways they communicate with you.

Like all other reptiles, bearded dragons are cold-blooded animals. This means they need to bask in the sun to absorb the heat to maintain body temperature.

In captivity, bearded dragons will most likely be in an enclosure and in the house. If they are kept away from the windows, you’ll need to provide them artificial lighting that has UVB.

If the bearded dragons are not getting enough of the UVB lights, they may start to turn black. This is their way of trying to absorb as many lights and heat as possible.

To remedy this problem and to prevent this from happening in the future, you’ll need to install a UVB light.

The artificial lights come in many different types. Some UVB lights also come with a basking light as well. Others will need to be purchased separately.

The one I recommend is TEKIZOO UVA UVB Sun Lamp, which is available on Amazon. It’s UVA, UVB, Heat, and Visible light that’s all in one bulb! Perfect for bearded dragons.

The reason they become stress is due to the new environment. As the bearded dragon is being introduced to their new environment, they don’t know or trust it yet.

To the bearded dragons, a new environment means danger could be all around them. Since they are not at the top of the food chain, they tend to be scared and will go into hiding.

Due to the stress they endure, they will turn black. Some bearded dragons will turn just their bearded darker, while others will be black all over.

To help them be less stressful is to simply let them hide. As they become more comfortable, they will come out and start to discover their new environment.

10. Getting Ready To Poop

You may notice your bearded dragon turn black for no obvious reason. In some cases, they will darken their beards before they have to defecate.

The reason behind this is not clear why they do that. Some bearded dragons will turn black, while others may not at all.

If this happens to your bearded dragon, pay attention to them, and see if they turn black. If so, this is normal for your beardie and you won’t need to worry about it next time they turn black for no obvious reason.

As for the darken bearded, after they have poop, in a few hours or so, the color will return to normal.

As you can see, your bearded dragon can turn black for many reasons. Some are not that serious and some are. If the reasons why they are turning black is serious, you’ll need to take action. If not, you could end up with a trip taking your beardie to the veterinary. Depending on how serious it is, a simple visit to the vet could cost hundreds of dollars. If it’s a surgery that’s needed, the average cost is $1,000.