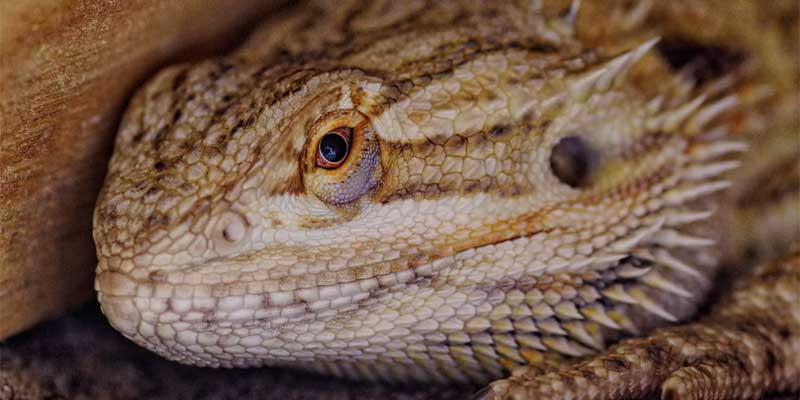 Owning a bearded dragon can sometimes be stressful at times. This is especially true if you’ve noticed they are acting differently. One of them is hiding during the day. While this can sometimes be normal, excessive hiding is not.

So, why might your bearded dragon be hiding? There are five main reasons they will hide. They may hide to escape the heat by cooling down, feel secure, hiding from other bearded dragons, have an illness, or they are brumating.

It’s important to determine which reason is causing the bearded dragon to go in hiding, especially during the day. Knowing the reason could be the difference between a happy bearded dragon and a trip to the veterinary.

Let’s take a closer look at each of the reasons so you’ll know why your pet beardie is hiding.

5 Reasons Why Your Bearded Dragon Is Hiding

There are a lot of other reasons why they are hiding, but in this article, we’ll only cover the 5 main reasons. This should give you a good understanding of each reason and what action to take if needed.

In their natural habitat, it’s usually sunny and hot in the woodlands. Temperatures sometimes can hover over 120 degrees Fahrenheit.

Therefore, they will go into hiding to escape the heat. This behavior can be during the day and at night as well.

Sometimes, the basking light might get too hot and the bearded dragon will go into hiding.

If you notice they are hiding more often than usual, check the basking lights to make sure it’s not too hot. You can try to position the light to be further from them or get a basking light with lower wattage. 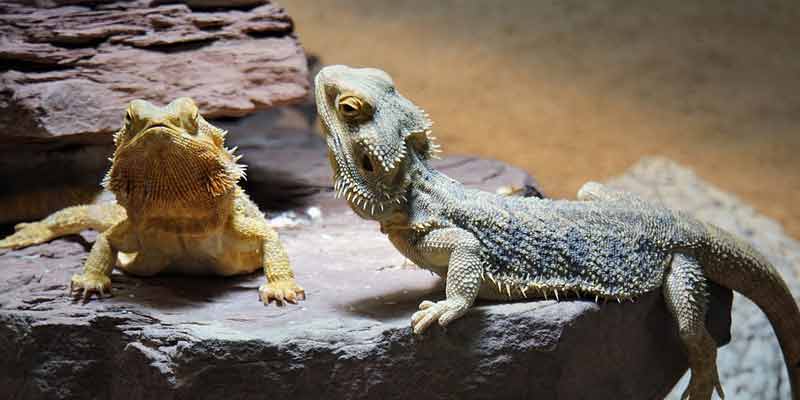 2. Hiding From Other Bearded Dragons

Having multiple bearded dragons in an enclosure could cause one or more of them to hide.

If they feel threatened or intimidated by the other bearded dragon, they will try to escape. Since they are in an enclosure, the only place to escape is to hide under an object.

This is usually the case when there are two males bearded dragons living together. Bearded dragons are territorial creatures and they will fight for them.
The one that loses will retreat and go into hiding.

Another reason could be a younger and older bearded dragon in the same cage. The older reptile will usually dominate the space will try to chase the younger one away.

To resolve both cases, you’ll either need to remove one of them from the enclosure or put all of them in a larger enclosure.

If you’re going to put them in a larger enclosure, one of them may still go into hiding. A quick solution would be to set up a barricade between the two bearded dragons. You can simply install a screen in the middle of the cage.

In the wild, bearded dragons will go into hiding when they feel threatened. They may seem tough with their look, but bearded dragons are not at the top of the food chain.

In captivity, even though there are no predators, they will still feel threatened by other things in the house. This could be children tapping on their cages, other pets roaming around them, or loud noise from the television or radio.

Due to instincts, it will force them to hide. The bearded dragon will not come out of hiding until they no longer feel threatened.

You can remedy these problems by simply moving the enclosure to a different location in the house. Bearded dragons are solitary creatures so they like to be alone and somewhere quiet.

In the wild, predators prey on the weak and sick because it’s an easy meal for them. When an animal is not feeling well, they are not able to move fast enough to escape the danger.

As for bearded dragons, they are not at the top of the food chain. Therefore, they will go into hiding when they are not feeling well.

If you notice they are hiding more often than usual, especially during the day. it means they may be sick.

It’s important that they recover as soon as possible. Hiding for a long time could affect their health. They need plenty of UVB light each and every day. If they are hiding and not getting enough of the light, their health will deteriorate even more.

If you suspect they are ill, it’s best to take them to the veterinary immediately. Sometimes, it could be an illness that requires immediate medical attention.

Bearded dragons go through brumation. This is when they hibernate and it’s natural for them.

During the autumn and winter seasons, it gets cold and there will be less sunlight during the day. Bearded dragons are cold-blooded animals so they need as much light as possible to keep warm.

Therefore, in their natural habitat, bearded dragons will go into brumation to save their energy.

In captivity, it’s still a natural cycle for them. When it starts to get colder, you may notice they are hiding more often. This behavior is normal since they are going into brumation.

During the colder seasons, it’s best to leave them alone and let them be.

If you have the heater on during the day, the bearded dragon may not go into brumation. They’ll be active as usual.

It only happens when the temperature gets very cold and they need to conserve their energy is when they go into brumation.

Choosing a Hide Box For Your Bearded Dragon

As you can see from above, there are many reasons why a hide box is important for a bearded dragon. You’ll want to have a hide box to make them feel at home. It’s recommended whether you have one or multiple bearded dragons.

A hide box is required for bearded dragons of all ages. This means before getting your pet bearded dragon, the first thing to have set up is a hide box. When you release them into their enclosure, they will most likely go into hiding.

Hide boxes are available at your local pet store or online store. They are usually designed to look like caves, rocks, and wooden logs. These are just a few items you can use. There are many other objects you can use to create a hiding place for them.

The hide box should blend in with the environment so the bearded dragons will feel right at home. If you have a woodland environment, it’s best to use caves and wooden logs. If the environment is a desert, using rocks is a good hiding place for them.

The most important thing is that the bearded dragon can fit in the hide box. It should be big enough to fit their entire body in there. If some part of their body is sticking out, they may not feel safe.

When To Take Your Bearded Dragon To The Vet

Above are some of the clues as to why your bearded dragons may hide. However, sometimes it could be a minor or a major underlying health issue. If they seem to be not themselves for a couple of days, take them to the veterinarian right away.

Another reason to take them to the vet is when they are hiding and not basking at all. This is a major health concern that needs to be addressed right away.

Bottom line, if you have any doubt about your pet bearded dragon, it’s best to take them to the vet right away. If it’s a major health issue, waiting too long to see the vet could end up costing you a lot of money. A typical surgery for a bearded dragon can be $1,000 or more.

As you can see from above, bearded dragons hide for many reasons. Some reason is good and others are bad. After reading this, now you know what to look for when your bearded dragon is hiding.