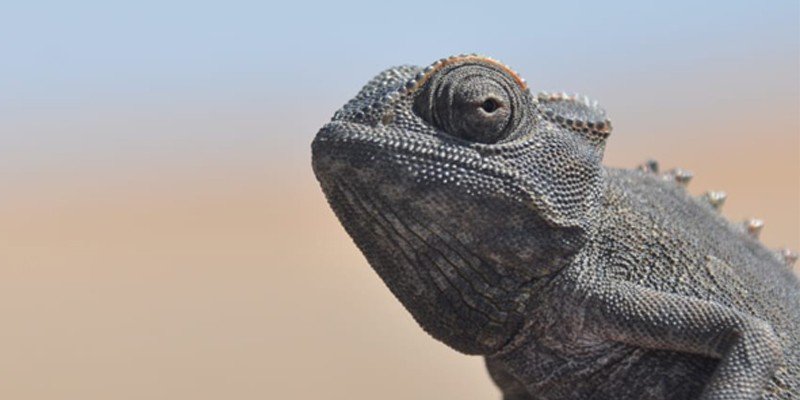 Chameleons are known for changing into many different colors. The colors are usually bright and vivid. However, there’s one color that’s usually not seen often, which will terrify most people when they see it. The color is black! Black is not a normal color for a chameleon and it will have a lot of people looking for an answer.

Why is my chameleon black? Chameleons change to the color black for three main reasons. The chameleons are either scared, stressed, or cold. It can be any of these three reasons or a combination of these.

Contents show
1 Chameleon Turn Black Due To Stress
1.1 Other Chameleons
1.2 Small Enclosure
1.3 Lack Of Plants
1.4 Lack Of Hiding Places
1.5 Insects
2 Chameleon Turn Black Because They Are Scared
2.1 Too Many People
2.2 Other Pet
2.3 Enclosure By Window
3 Black Chameleon Due To Cold Temperature
4 Reasons Why Chameleon Drops To The Floor After Turning Black
5 Conclusion

Chameleon Turn Black Due To Stress

If you notice the baby or juvenile chameleons are always black or in a darker shade for most of the day, this is them being scared.  When this happens, it’s recommended to remove them from the enclosure and put them in an enclosure by themselves.

Introducing new chameleons to each other is another reason why a chameleon might turn black.  When you have a new pet chameleon and putting them in a cage with other chameleons, they all will be scared.  When this happens, they will turn black.  However, don’t do anything yet as they might need some time to adjust to each other.  Monitor them closely to see if they change back to their normal color.  If after an hour or so and they are still black or in a darker shade, remove the new chameleon from the enclosure.

Chameleons like to roam freely and have plenty of room to move around.  When the enclosure is too small for them, they can’t move around much.  Chameleons on average move to a different area about 3 to 5 times a day.

In their natural habitat, when they sense danger, they will move higher up into the trees or plants.  The like to be higher up so they can see what’s going on and able to escape danger if needed.  When the enclosure is too small and doesn’t have room for them to move, especially going up, they will get stressed.

It’s easy to see if the enclosure for them is too small by looking at their color and their location.  If the chameleons are always sitting near the top of the enclosure with their skin color black, they are both scared and stressed.  This means it’s time to get a bigger enclosure or move to a bigger one.

For baby and juvenile chameleons, a small enclosure is perfect for them.  In the wild, they will usually stay under the leaves of plants for most of the day.  The small space makes them feel safe and secure.  When they get older, they will require more room to move and this is when a small enclosure will no longer be needed.

Chameleons are arboreal, which means they spend the majority of their lives in trees.  Trees and plants are part of their natural habitat and this is what they need in the cage.  Without plants and trees, they will be stressed because they use trees and plants for sleeping, hiding, and hunting.

While you can’t replicate their natural habitat with large trees, you can go with smaller types of trees such as ficus or yucca plants.  These trees are smaller in size but they are also found in the wild where the chameleons like being around.

Chameleons are slow-moving creatures so they need hiding places to keep them safe.  These creatures hunt by hiding themselves in trees and plants.  As prey comes along, they will flick out their tongue to catch the prey.

Besides hunting, they need plenty of hiding places to sleep.  Chameleons will not sleep out in the open due to fear of being eaten by predators such as birds and snakes.  When they are sleeping in a hidden place such as under a plant, it will be hard for the predators to locate them.

In the enclosure, have a lot of plants, especially plants with large leaves.  Chameleons love to hide under the leaves of plants.  Some of the best plants for chameleons are ficus, hibiscus, croton, and jade plant.  These tropical plants are also found in their natural habitat.

Chameleon Turn Black Because They Are Scared

Chameleons are one type of lizard that doesn’t like to be handled, especially by a lot of different people.  Chameleons are better off left in their cage and being watched than handled.

Other pets in your home such as cats and dogs could cause the chameleons to be scared.  The dog will be no harm to the chameleons, but the chameleons see them as a predator.  Dogs and cats are curious animals by nature.  They like to seek and discover new things around them.  When the dog sees the chameleons, they might start barking at it.  The chameleons will be startled and scared.  They will turn black and may drop to the floor as self-defense.

To make sure your other pet and the chameleons can live in harmony, give them spaces.  If the dogs and cats seem to be causing them to be scared, put them in a room where the other pet doesn’t have access to them.

In addition to dogs and cats, other pets such as another lizard could scare the chameleons too.  Chameleons should never be put in with another lizard species.  They will most likely end up hurting each other and even kill one another.  If you decide to raise other lizards, keep their enclosure separate from each other.

Black Chameleon Due To Cold Temperature

Like many other reptiles, chameleons need heat to maintain optimal body temperature. When they are cold and need to absorb the heat, they may turn black or another darker color shade.  In this situation, turning black would be normal.  Darker colors absorb heat more quickly and you may see your chameleons in black color for an hour or so. After they are warm, they will change to a lighter color.

To help them regulate their body temperature, you can install a basking light on top of the cage. Basking light will help keep the chameleon warm.

The basking spot temperature should be different from the rest of the enclosure. The optimal temperature for the chameleon will depend on their species. For most species of chameleon, about 95 Fahrenheit is normal for them.

However, during night time, the temperature should drop lower to around 80 to 90 Fahrenheit.  The colder temperature is to induce sleep.  During the night time, you may notice that the chameleon is black or a darker shade.  There’s nothing to be alarm about as they change to the darker color to absorb heat during the night.

Reasons Why Chameleon Drops To The Floor After Turning Black

Your chameleon turns to the color black and all of sudden, it drops to the floor. If you see this, don’t panic! This is their natural response to protect themselves when they are scared. Predators are less likely to eat dead animals and this defense usually works.

One of the reasons could be a person is too close to the cage. The chameleon will feel threaten, turn black and drop to the floor.

Another reason could be a pet in your home. A dog may come too close to the cage and start barking, and this could scare the chameleon. In response, they will turn black and drop to the floor.

If you do see the chameleon turning black and dropping to the floor, do not try to help the chameleon.  It’s better to just walk away and let them be.  You might be worried they could be hurt from the fall.  There’s nothing to worry about as the chameleon will puff themselves out before hitting the ground.

When they have fallen to the ground, do not try to help them.  If you do try to help the chameleon, they may feel even more scared and could bite you.

In about an hour or so, come by to check on them to see if the chameleon is ok.  More than likely, when they feel they are not in danger anymore, they will get back up and climb to their favorite spot again.

The next time you see your chameleon black, don’t panic!  They are either just scared, stressed, or need some warmth.  The best thing to do is to remove all the elements from their cage so they won’t.  Just remember, chameleons that are under stress for a prolonged period of time can die.