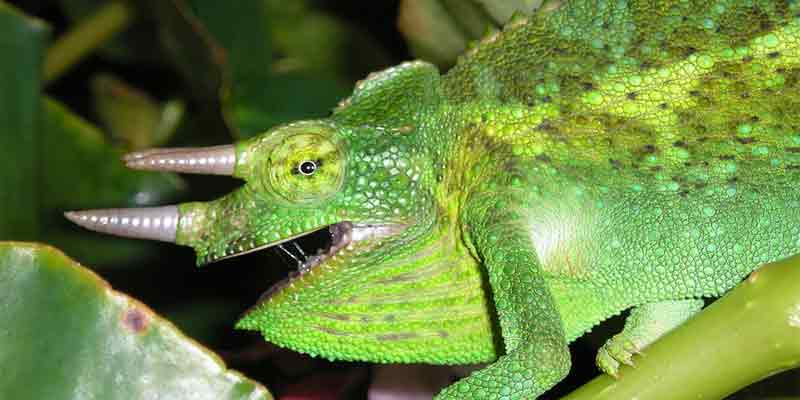 Chameleon is an interesting creature and a really great pet to have. There are times where they may act strangely and you’re probably wondering what’s wrong with them. One of those strange thing is keeping their mouth open. Most people may think their pet chameleon is yawning and think it’s normal and will not think of anything else. Chameleons don’t yawn and there are reasons why they keep their mouth open.

So why is my chameleon mouth open? Chameleon may open their mouth to drink water, when it’s shedding, being defensive, they are too hot, or they are suffering from a respiratory infection.

Above are the reasons why chameleons keep their mouth open. While most of the reasons are harmless, some could be life-threatening for your pet chameleon.

Below, I’ve gone into details for each reason why they keep their mouth open. To understand more of each behavior in detail, keep reading.

This is nothing to be concern about as this is normal for chameleons. Chameleons aren’t like other pets that drink water from a bowl or bottle. Instead, chameleons drink water by licking droplets of water on leaves or letting water drop into their mouth.

Each chameleon has different ways of drinking water. Some will lick water from leaves and plants, while others will stay under a plant with their mouth open.

If you have a pet chameleon that just sitting there with its mouth wide open after you’ve misted the enclosure, this is normal for them. They are sitting there waiting for the droplets of water to drip into their mouth.

After they are finished at one location, if they are still thirsty, they may move to another location. They will do repeat the process of just sitting there with their mouth open.

During shedding, you may notice that your pet chameleon is opening their mouth for a long time. There’s a great reason why they keep their mouth open.

Shedding old skins takes time to shed them all off. Sometimes, it can take a week or even longer to completely shed.

The old skins that are hard for chameleons to shed will be around their mouth and eyes. This is the area where it’s difficult for them to shed since they can’t rub their head against the trees or plants. Therefore, they will open their mouth to help stretch the old skin so it can fall off.

If the old skin doesn’t shed, the chameleons can get very irritated and could cause them to become stressed. If you notice they are opening their mouth during shedding, you can help them by peeling the old skin off for them.

Before doing so, take a paper towel and make it a little damp. Gently rub the damp towel around their mouth and eyes. After a couple of minutes, slowly peel the old skin off their body. If it doesn’t want to come off, rub the damp towel again and repeat the process.

Never try to peel the old skin off with your bare hand. The old skin may still be attached to their body and it could hurt them.

Most species of chameleons are very defensive. This is especially true for male chameleons.

In the wild, there are predators, other male chameleons, and all sorts of dangers around them. To protect their territory or to frighten off the intruder,  a chameleon best defensive is to make themselves look aggressive. This is done by puffing up their body and opening their mouth as wide as possible. This behavior will not only make them look more aggressive but make them appear to be bigger.

In captivity, if you notice your pet chameleon is opening its mouth when you or your pet is around, it’s being defensive. Slowly back away and investigate what could be the issue.

When they are opening their mouth, it’s a sign that they are scared and whatever is near them is a threat.

If it’s you they are being aggressive at, it could be the article of clothing you have on. Sometimes, a pair of sunglasses will confuse your pet chameleon and they will think it’s a stranger. Try taking the sunglasses off and see if they are still being aggressive and opening their mouth.

For pets, chameleons will see them as a threat. After all, chameleons are not at the top of the food chain. They have to be defensive to protect their lives.

If you have the enclosure next to a window, it could be the birds and other backyard animals that are causing them to be scared. Birds are one of the predators that feed on them, which is why they could be defensive. Another could be squirrels and raccoons that are roaming your backyard.

It’s recommended to remove all threats that are causing them to be defensive with their mouth open. If this continues for a long time, it could cause them stress or other serious health problems. 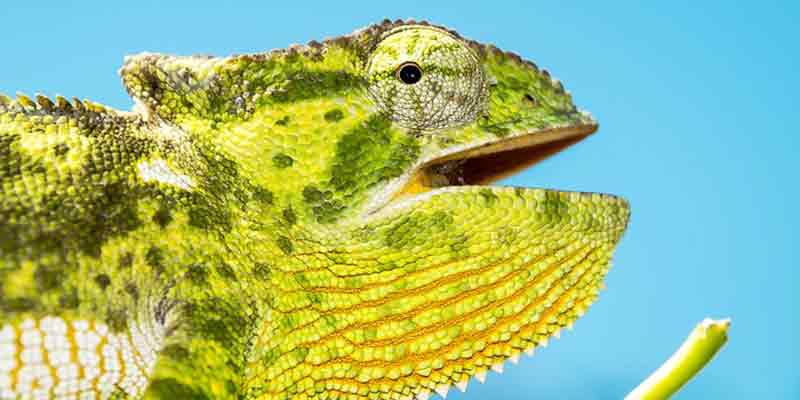 4. Chameleon Keeping Its Mouth Open When It’s Too Hot

However, chameleons need the correct temperature to survive. Being too hot or too cold can cause them to have health problems.

In order to regulate their body to the correct temperature, they’ll need a heat source.

In the wild, they get the heat from the sun. When chameleons need their body to warm up, especially in the morning, they will climb up higher in the tree to absorb the heat. After getting warm enough, they will crawl back down the tree and hide under leaves and plants.

In captivity, this is not possible as they depend on you for the heat source. This can be accomplished by installing a basking lamp.

It could the temperature in the enclosure that’s causing the problem. You’ll need to adjust it so it’ll fall within their correct range.

The temperature below is the correct range for each species:

Bulb Distance – The distance of the basking bulb could be causing your chameleon to open their mouth. The spot where they are basking may be too close to the basking light.  Simply move the basking spot further down so it’s less hot. If that’s not possible, move the entire basking light fixture higher up the cage or move it to a different location.

Make sure to check the temperature and see if it’s within the correct range for your chameleon species. It’s a good idea to test the temperature a couple of times every hour to get an accurate reading.

Bulb Temperature – If you notice that your chameleon is opening their mouth while basking, check the bulb temperature. The temperature of the bulb will vary from one to another. While the manufacturer will tell exactly how their bulb will get, it’s not always the case. This is mostly due to the temperature in your home.

Another thing to check is the age of the bulb. Each basking light has a certain amount of hours before they start to go bad. Even the bulb is still lighting up, it doesn’t mean that it’s putting out any heat. Check the manufacturer for the basking light lifespan and change it when it’s getting close to the date.

Other Heat Source – If you have the correct bulb temperature and the correct bulb distance, but your chameleon is still basking with their mouth open, other heat sources in the house could be causing it.

While you may not think of it, the enclosure for your pet chameleon may be too close to a heat source. This could be anything from the refrigerator, the oven, or close to a heating vent.

Kitchen appliances don’t seem like they generate a lot of heat, but when it’s combined with the basking light, it could add a few degrees to their enclosure.

Glass Enclosure – If you have a glass enclosure and your chameleon seems to keep it’s mouth open for a long time, this could be an issue. Glass enclosure is not really recommended for housing chameleons.

Since it’s glass all around, the heat will only dissipate through the top of the enclosure. This will make it difficult to keep the temperature within the correct range.

Instead of using a glass enclosure, you should consider using a screen cage. A screen cage allows air to flow freely in and out of the enclosure.

To find what’s the best cage for your chameleon:  Best Cage For Chameleons 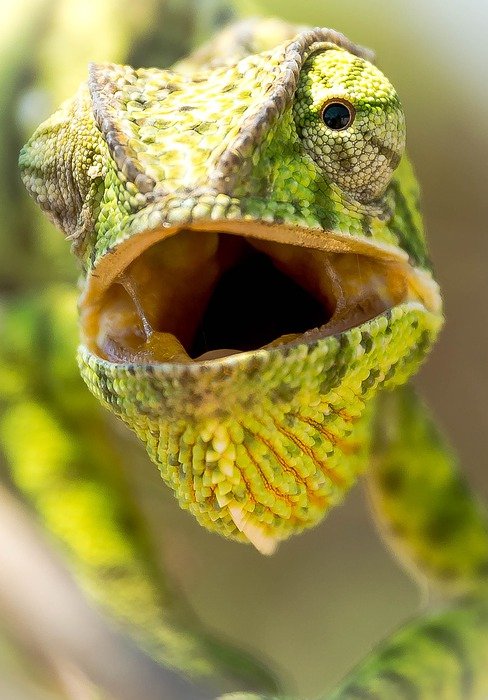 Chameleons that keep their mouth open all day long could be having health problems. One of the health issues to be aware of is a respiratory infection.

Chameleons that has a respiratory infection will just sit under the basking light and not move anywhere. This is followed by tipping its head up and taking a big gulp of air from time to time. Also, they may have mucus in their mouth and some may drip down their mouth.

Respiratory infection is something that can’t be treated at home. There is no over-the-counter medication to help treat it. It requires medical attention and will need you to take them to the veterinary as soon as possible.

After reading this, you know now why your pet chameleon is keeping its mouth open. So the next time they do this strange behavior, you know if any further action is needed.