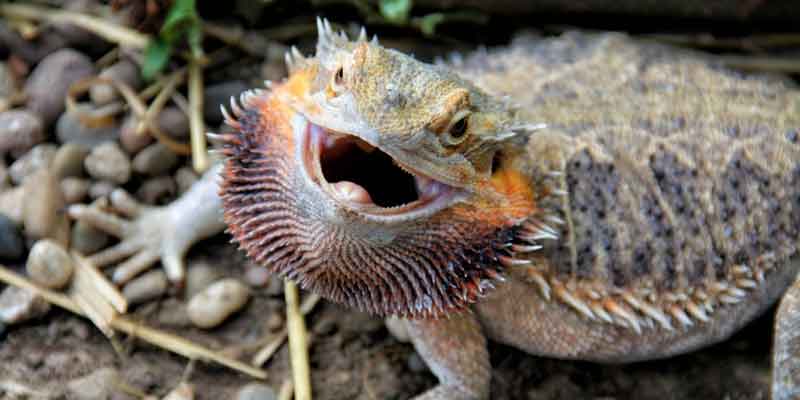 If you have a bearded dragon, there are a lot of things that they will do which will make you wonder. One of the things you may notice is your bearded dragon puffing up. Normally, this creature is quiet and relaxed. When they start to puff up, you will wonder why and if it’s a good or a bad thing.

So, why does my bearded dragon puff up? Bearded dragons will puff up for several reasons. This includes stress, challenging each other, mating seasons, and defensive posture. In captivity, bearded dragons are more prone to puffing up since they are kept in an enclosure. This prevents them the space needed to escape when they feel threatened. However, there are many ways in which you can help calm them down.

Bearded dragons get their name from the “beards” (loose skin underneath their chins). The skin is able to be stretched to a certain length when they puff up.

Typically, bearded dragons will puff up to make themselves appear larger and more threatening.

However, this behavior of puffing up can mean other things as well. In this article, we’ll go through in detail able other reasons why bearded dragons puff up. Below are the 4 main reasons why your beardie may puff up.

When they see a female nearby, the male beardie will puff up to get their attention.

In response, if the female is interested, she will start with head bobbing or arm-waving. Both of these signs tell the male that she wants to mate.

Unlike many other animals, bearded dragon mating season isn’t during a specific time of the year. Typically, they will mate one month after brumation.

Brumation is when the bearded dragons go into hibernation. They usually occur during the colder or rainy season.

Therefore, if your bearded dragon starts puffing up when he sees a female, there’s nothing to worry about as this is their mating behavior.

In the wild, bearded dragons are territorial animals. Once they are an adult, they prefer to live alone.

Those that are kept in captivity will also be territorial. When two or more bearded dragons are kept together, problems will arise. Below are several things that may happen:

Bearded dragons may puff up when there is a predator close by. By puffing up, it will make them look larger and more threatening. Doing so will make them appear to be a meal that will be too difficult to eat.

Some predators will see this and go away. If the predators don’t retreat, the bearded dragons may start to turn black and hiss at them. 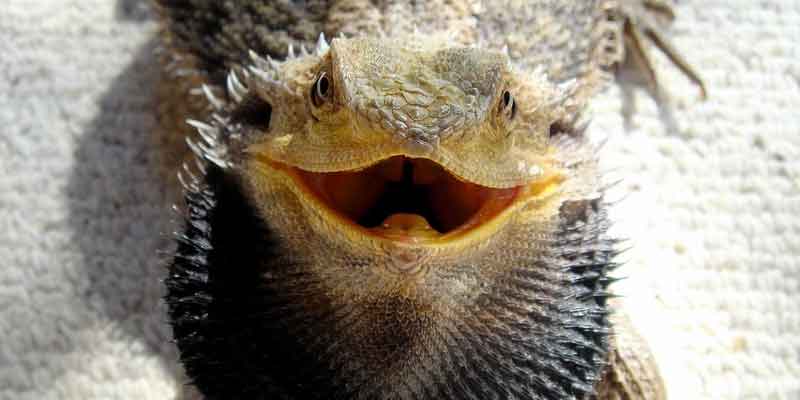 In captivity, the most common reason bearded dragons puff up is due to stress.

When your beardie puffs up once in a while, that’s no cause for concern. However, if they start to puff up often, then it may be something that you should look more into. More than likely, it will be a chronic stress problem.

Bearded dragons could have stress from many things around them, which includes you.

These creatures are small, and they see everything that’s larger than them as a predator. While you may not hurt them, your bearded dragon will think otherwise. This is an instinct that is to help keep them alive.

Other stress could be other pets in the house. If they are always coming close to the cage, the bearded dragon will feel threatened and become stressed.

Other Signs Of Stress In Bearded Dragons

When a bearded dragon is stressed, puffing is usually the main sign. However, depending on the individual beardie, they may also exhibit other signs, which includes the following:

How To Help Stressed Bearded Dragons

Bearded dragons that have stress can put a toll on their body and shorten their life span. It’s important to know when your beardie is under stress, so you can take care of the problem before it gets worse.

When your bearded dragon is stressed, there are many techniques that you use to help calm them down. Below are some that you can try to help relieve stress for them:

Don’t handle them too much. Some bearded dragons don’t like to be handled. If you hold them, and they seem to be stressed, it’s best to not handle too much.

Give them a bath. A bath helps calm your beardie down. Place them in the bath of water that’s luke warm and only a couple of inches deep.

Remove stressors from their environment. This could several things such as your cat, dog, birds outside the window, and even another bearded dragon. This reptile is at the bottom of the food chain, and so they have a lot of predators. They will see your pet as a predator and will be stressed every time they see them.

Bearded dragons will usually puff up due to a particular reason. If they puff up once in a while, or it’s during mating season, there’s nothing to be worried about.

However, if they are puffing up often, and it’s not mating season, it means your bearded dragon is feeling stressed and threatened. Be sure to take the necessary steps to calm them down. Over time, they will get used to their environment and things around them and will not puff up often.